I saw Django Unchained in the movie theater today, and the scene where three angry dogs kill a slave by ripping all his limbs off made me think it was time for a Molly update on the blog. The first thing you need to know is that Molly hasn’t yet ripped a person’s limbs off, and also, she’s not a racist dog. She’d just as likely rip a White, Asian or Mexican person limb-to-limb as she would a Black person.

Now the first thing people always want to know when it comes to any good Molly update is her size. I could tell you that we just weighed her yesterday and she came in at 76lbs. But that doesn’t really tell you how she compares to when we first got her or at any other milestone in her life. A smarter man than me could set up a professional-looking graph in Excel to show how her size has changed as she’s gotten older. A man of my average intellect opts for the handwritten graph:

Or, if numbers isn’t your game, this might work better for you.

Here’s what “Molly being held by Julie” looked like as a two-and-a-half-month-old puppy: 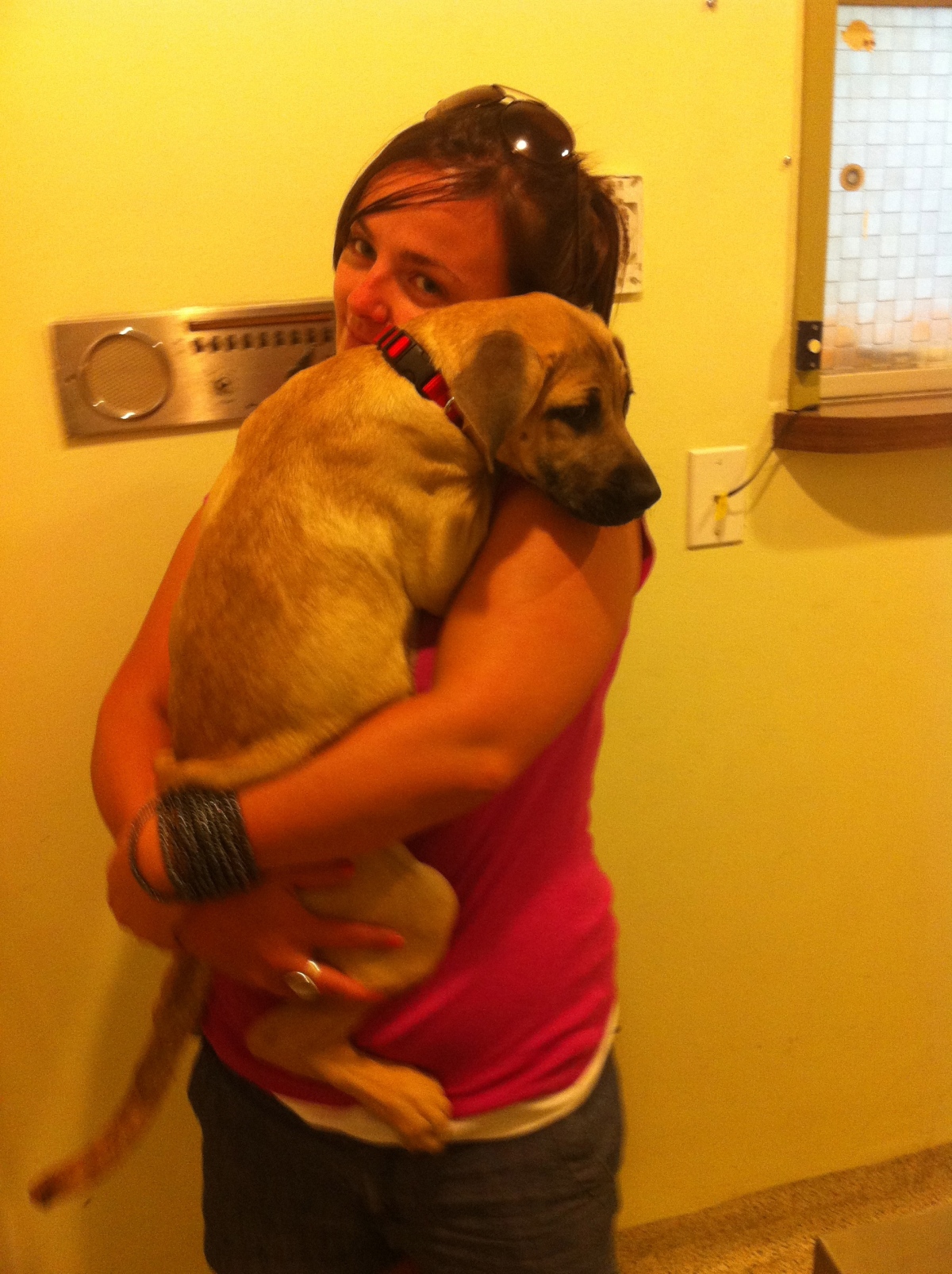 And here’s what “Molly being held by Julie” looks like as of January 9th (seven-and-a-half-month-old puppy): 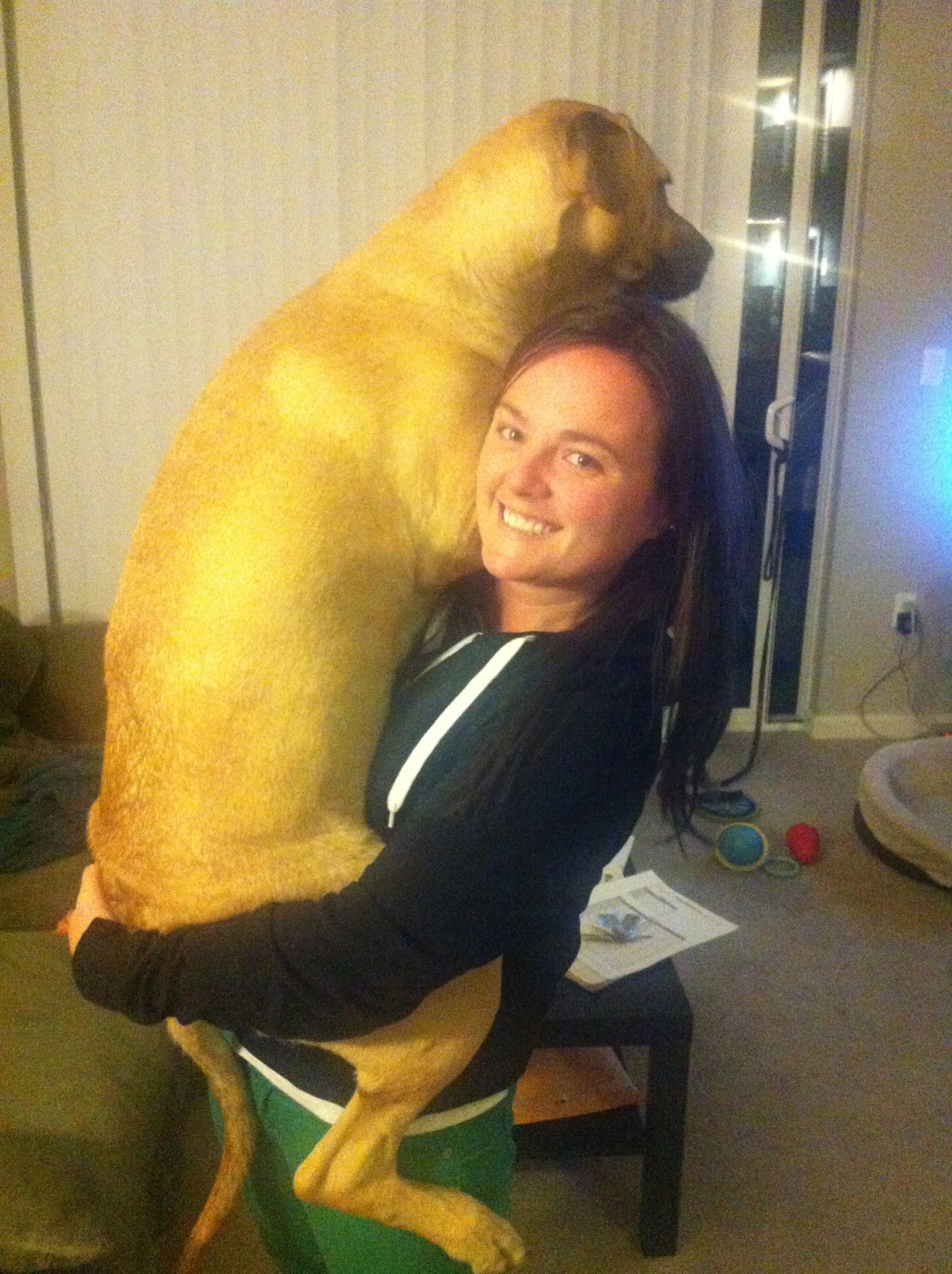 If you were only reading this to check in on Molly’s weight, you can stop now. For the rest of you, here are some more fun and/or alarming Molly tidbits for your reading pleasure:

-One thing we’ve been particularly pleased about in our five months with Molly is that she really hasn’t done any damage to any of our possessions. You always read these horror stories about the dog that eats all the contents of a trash can or an entire TV. But as happy as we’ve been about this, we’re also smart enough to realize she hasn’t destroyed anything because she’s really never had the chance. As a dog, when you spend every alone moment inside a crate and your Dad’s an unemployed writer who’s home 24/7, you really don’t get many chances to go to town on the prohibited household goods. So what happened on New Year’s Eve? Well, we went to a party until about 1am. When we came home, we put Molly on our bed to let her sleep with us for the night. She got restless at some point and decided to jump off the bed. Usually this wakes me up and I guide her into her crate for the rest of the night, but for some strange reason I was in a deeper state of sleep than usual that night. At 4am I woke up to find Molly innocently curled up on the living room couch, another favorite sleeping spot of hers. Of course all the innocence and “oh isn’t that the cutest!” feelings disappeared quickly when I looked on the ground and saw this crime scene: 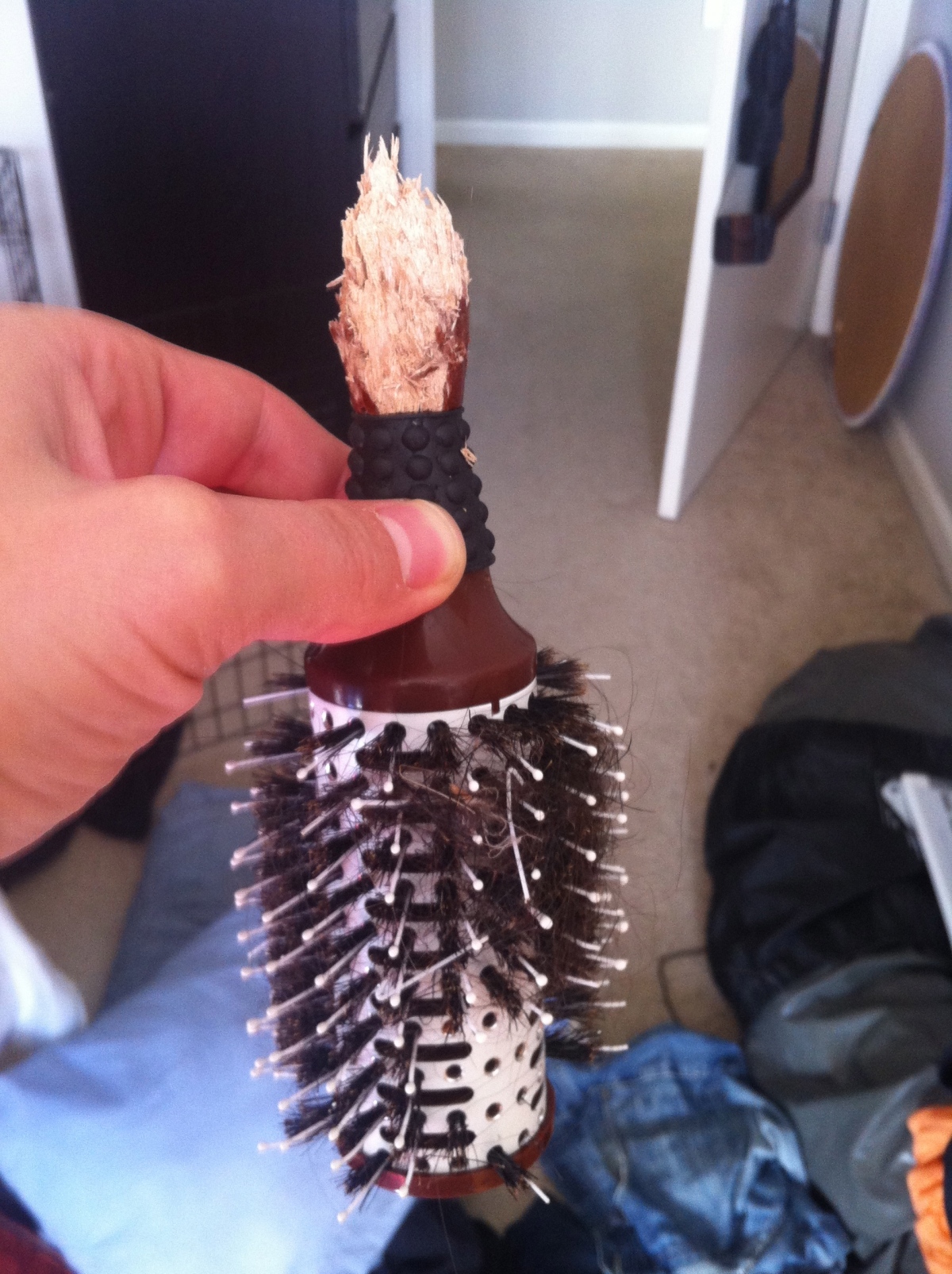 A few more thoughts on those pictures:

-Speaking of destroying things…Over the five months of having her, we’ve given Molly an array of toys (and a plethora…a plethora seems like a good word to describe the more than 30 toys Molly has at her disposal). In her first three-and-a-half months with us, Molly almost never destroyed any of her toys. Some of her older toys would inevitably get small holes in them from natural wear and tear, but she always seemed to play with them gently enough. But over these past seven weeks, Molly has turned into a homicidal maniac when it comes to her stuffed-animal toys. She’s out for blood and she’s taking no prisoners. Here are the toys she’s no longer allowed to play with because the risk of her demolishing them and eating all the stuffing is just too high:

I’m pretty sure all the Toy Story characters would commit suicide if they saw Molly in action for 10 seconds.

-And here’s Molly’s new, smaller array of toys to choose from: 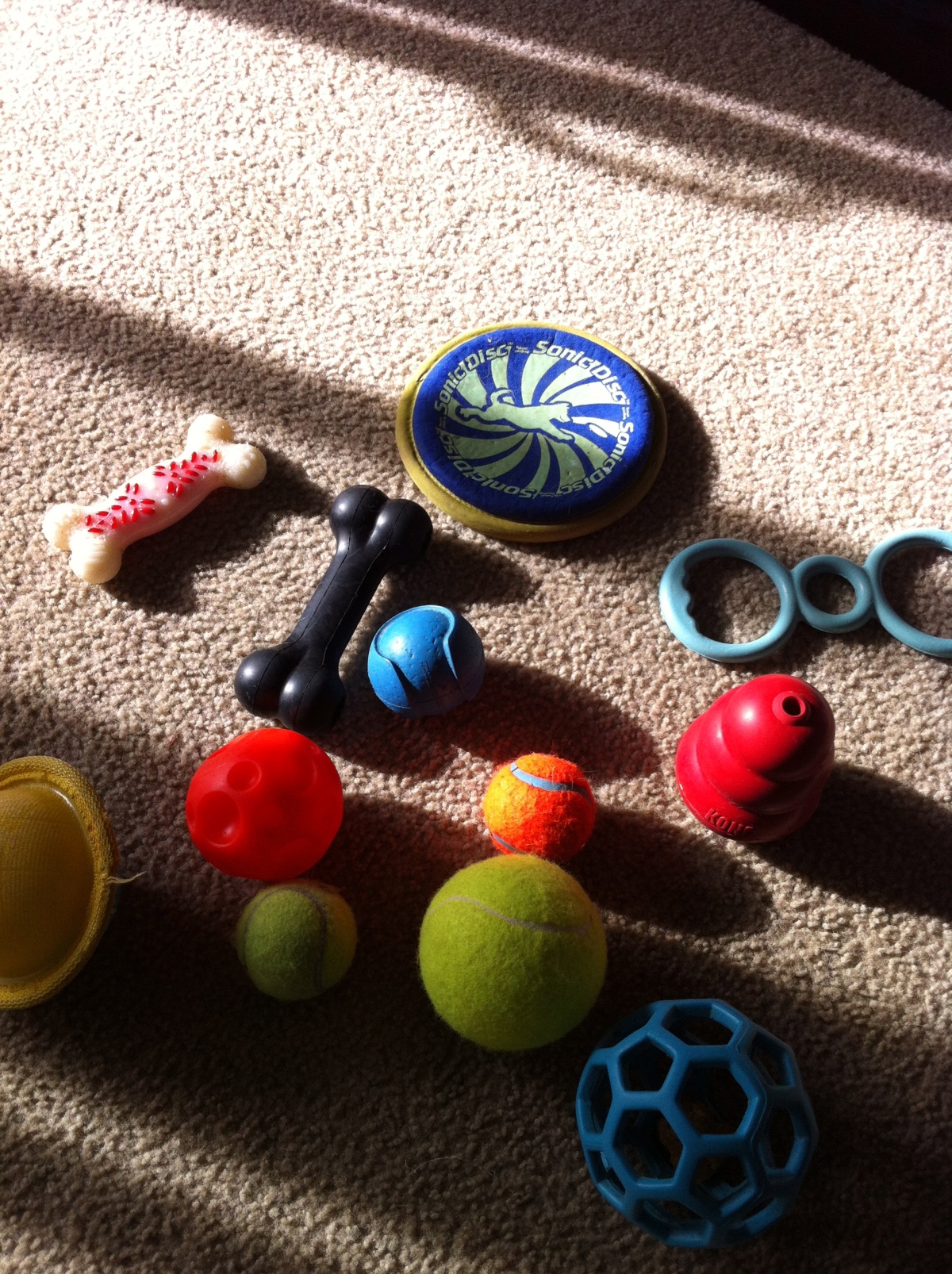 Not nearly as exciting as the stuffed animals at times, but my dog budget doesn’t include “replace decimated stuffed animal daily” as a line item.

-So I mentioned something being wrong with Molly’s stomach. For simplicity’s sake, let’s just say Molly hasn’t really been “regular” for the past six weeks. The beginning of this situation coincided with a two-day period where Molly refused to eat the dog food that she’d been happily devouring for the better part of four months up to that point. I seriously thought she was just playing a game of psychological warfare with us and was holding out for better food (i.e. human food). But the Vet’s theory was that Molly’s puppy food might be suddenly too rich for her and it was time to switch to an adult food. But before we could do that, we had to get her back to normal again by putting her on a bland diet of wet food (basically setting the reset button on her stomach). Long story short, we’ve been playing around with so many different foods for the past month that we could literally run a black market pet store out of our apartment:

And of course right before that first Vet visit where they told us to take her off the puppy food, we had just bought a new 30lb bag of the damn puppy food (pictured in the unmarked plastic container above). So if anyone wants to buy about 27.5lbs of puppy food, I’m willing to make a deal. I will not give it to you for free because I’m bitter. I’d rather throw it in the trash.

-Oh and the latest update is that the Vet no longer thinks the stomach issues are related to the type of food Molly’s eating. No, now they think it could be a bacteria/parasite/alien species living in her intestines. So on top of the food surplus, we could now start shipping most dog meds to you as part of our black market operation:

We’re one more Vet visit away from having to get one of those pill organizers that says all the days of the week on it that old and/or pregnant people use to keep track of their med schedules. Our puppy is an 88-year-old woman.

-And finally, let’s end on a lighter note. If by some magical way Molly was able to talk to us for just 15 seconds, saying only one thing and never being able to talk again, I’d like to think she’d spend that time reassuring Julie that she’s never once been cold when Julie thinks she’s cold. She would say, “Look, I don’t need blankets, extra cuddling or a space heater pointed directly at me. It’s science, Mom. My body temperature is three degrees higher than yours. If you’re not cold, rest assured I’m not cold. I probably should have spent this time telling you guys what it means when I bark, pull on my leash or chew through my toys, but I just needed to clear this temperature thing up once and for all.”

So that’s the latest in Molly’s life. If you’ll excuse me, Julie just yelled from the bedroom to bring her all the blankets we have in the house.

5 thoughts on “The Ultimate Molly Update: A Dog’s Life in Words and Pictures”