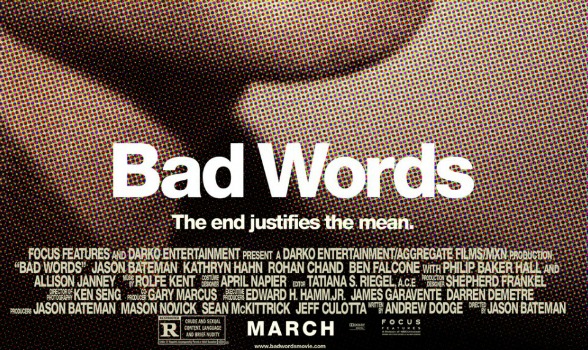 It’s amazing that the recently released black comedy Bad Words is going to be a mild success.

Amazing because I can almost guarantee you’ve never heard of it, that’s how nonexistent their marketing was (The only reason I stumbled upon it was due to a trip to Universal Studios where they happened to have a very small poster advertising it).

Amazing because the $10 million movie is the story of a vengeful adult who finds a loophole that allows him to participate in—and possibly ruin—a children’s national spelling bee. Not really a film that screams “Must See!” to the masses.

And amazing because the only bankable actor in the film was Jason Bateman…not someone you’d normally associate with carrying a movie.

But I’ll be damned if he doesn’t do exactly that. Bateman gives this cynical character plenty of dimensions, and he somehow pulls off becoming an empathetic figure while simultaneously being reprehensible.

And it turns out he also made his directing debut with Bad Words.

When you see the boring story lines and the blah locations, you’ll agree that he made something above average without much help.

I’m really not sure why Universal/Focus Features came to the decision to spend exactly $179 on worldwide marketing for this movie. If they had bothered to promote it, here are a few marketing pitches I heard they were considering:

Bateman is basically doing the intellectual version of the grown up who goes balls-to-the-wall in a children’s basketball game. Just swatting the ball away on every shot attempt; firing the ball at a child’s face to “save it from going out of bounds”; trash talking the poor kids off the court.

For a sense of comparison, I’d go so far as to say Bateman’s performance is on par with his funniest acting jobs, but the overall quality of the movie doesn’t touch his high water mark, Horrible Bosses (a movie that has somehow climbed so high on my all-time comedy rankings that it would probably be the runner-up to The Big Lebowski if I was forced to choose one movie that I had to watch every day for the rest of my life).

You should see this movie if: You worship at the altar of Michael Bluth or Jason Bateman; you are so in love with comedy that you can’t wait for something to come out on DVD even if you know the overall story can’t possibly be worth paying for; you enjoy watching children suffer; you can get on board with a movie that depicts the bully as the hero; you want to see an inexperienced 10-year-old actor hold his own in this made-for-adults comedy; and like me, you know that Bateman is on a slow yet steady ascent to being a legitimate A-list comedic actor.

You should not see this movie if: You know you’re going to feel bad for the children; you take the treatment of children so seriously that you can’t even fathom laughing at something bad happening to one of them; you need an airtight plot to enjoy a movie; you need the cliched happy endings and the convenient wrapped up loose ends; you hate Bateman (in which case my girlfriend will gladly recite a list to you called “101 reasons that Jason Bateman is the greatest man on this planet”); you aren’t the type who could realize this is all just scene after scene of SNL skits and yet still enjoy it.

In terms of ranking this movie regardless of where you watch it, I’d have to give it a mere 5.5 on the Ross Watchability Scale (RWS). But of course it would be a little higher if we’re just determining whether or not it’s a worthwhile Netflix rental. You will laugh (and gasp) enough to  justify giving Bad Words 90 minutes of your precious time.

(WARNING: There might be some spoilers for those who aren’t up to date on Game of Thrones.)

The end of football season in early February is so cruel.

A weekend during the other seven months of the year means a fun Friday and Saturday but a boring Sunday spent thinking about that dreadful Monday morning. Worst of all, you’re expected to go outdoors on these Sundays!

Unfortunately I don’t have a solution that will get you back in front of the TV for the entire day, but I can give you a few hours of awesomeness to look forward to starting this coming Sunday, April 6th.

Starting Sunday we get a brand new and very promising comedy called Silicon Valley (the first date), the return of one of the best comedies you’re probably not watching, Veep (the great fling), and finally, as you may have heard, a little fantasy drama called Game of Thrones is premiering its fourth season (the complicated lover).

All on HBO. Consider me a subscriber for life at this point.

I was in on this show the moment I heard the words “Mike Judge” and “Silicon Valley.” Mike Judge because he has an incredible track record (Office Space, Beavis & Butthead, King of the Hill). Silicon Valley because I lived there for seven years and have always thought there was plenty ripe material for a TV show.

In fact, one of the first ideas I worked on when I moved to LA was a TV pilot about a group of young sales guys making way too much money in Silicon Valley.

He went with programmers; I went with sales guys. He actually wrote it and followed through with the idea; I wrote enough first drafts to fill a warehouse but never returned to it. The lesson? The line between success and wannabe in Hollywood is razor thin.

It seems to me a comedy about the fast-paced world of technology on a channel that allows for plenty of swearing, sexual content and whatever the hell else this show wants to do is easily worth tuning in to on Sunday night.

Fingers crossed that this is a good first date and not one of those encounters that ends with an awkward hug at the car while the girl waits for me to say I’d like to see her again.

I wrote earlier that this is the best comedy you’re not watching. Maybe you are watching it, but I just haven’t heard enough people say that they are. Either way, you should be. This is Julia Louis-Dreyfus at her finest. This is political humor, satire and subtle comedy at its finest. This is intelligent humor at its finest. In fact, if you try watching Veep and “don’t get it,” well, I hear there’s a great lineup on CBS that’s probably more your speed.

And to pat myself on the back just a bit, I’m the king of finding niche comedies right before they blow up and go mainstream (see: It’s Always Sunny in Philadelphia, August 2005).

I’m calling this show the great fling because it shows up once a year for a short time (10 episodes), we always have a good time with each other, and there’s never any drama or seriousness. No emotional baggage. I love it when it’s around, but don’t think about it too much when it’s gone.

And then there’s the complicated lover who leaves me with plenty of emotional baggage at the end of each season. This isn’t a fun, easy-going fling. This is an intense relationship with weekly roller coaster rides that leave me feeling exhausted.

But I haven’t looked forward to a TV show this much since the early days of Lost.

In fact, my GoT withdrawals got so bad a couple weeks ago that I ordered all five of George R. R. Martin’s books during a random Amazon.com binge. I haven’t read a book in quite some time so trying to take down roughly 4,500 pages of a fantasy world is going to be quite the feat. But I simply needed my Khaleesi fix.

Game of Thrones is currently the crown jewel of television. I won’t accept a single argument against that statement.

And starting on Sunday maybe we’ll finally get to see the good guys of Westeros live long enough to take down the bad guys. But based on past performance, I won’t hold my breath for that.

And now I’ll leave you with six random thoughts about the best show on TV:

Enjoy Sunday night all you HBO subscribers (and those of you “borrowing” your friend’s HBO GO login information).