Whew. So many movies to review, so little time. But it’s officially the start of summer, which means good TV is mostly hibernating until the Fall, your kids are out of school, and sometimes you just need to sit in a theater to escape the heat. Here are some quick hit thoughts on the four most recent movies I’ve seen, all of which are still in most theaters.

It’s been a few weeks since I’ve seen this movie, and it was definitely one I was highly anticipating. The original Pitch Perfect was amazing. It was clearly a movie where the more you watched it, the better it got. It was a perfect combination for people who like karaoke, sing-alongs, etc. There wasn’t a ton of plot thrown in your face, and it felt like we got a ton of music throughout the film. The second installment was funnier overall and had more storylines. Both of those aspects worked well, but the problem is they came at the expense of some of the musical experience. Don’t get me wrong, there was still lots of music, but I don’t think the songs or performances will ever be as memorable as the first. My initial reaction was that the music in Pitch Perfect 2 was horrible, but when I listened to the soundtrack and started to remember the scenes, I realized I was being a little harsh. The Bellas’ competition this time around was the German powerhouse acapella group, DSM. (Basically, this was Pitch Perfect’s “Mighty Ducks 2” movie, where there was a European villain and the stakes moved from the United States to a Worldwide level.) The other polarizing musical decision revolved around an original song. If you remember, PP1 had “Cups.” It was an immediate sensation both within the movie and on the radio. In PP2, we got “Flashlight,” and the jury is definitely out on whether that was a good decision or not. The dirty little secret of this movie is that the Germans were 1 billion times better than The Bellas. Oh well. The movie was solid, and I guarantee it’ll be another case of “it gets better the more you watch it.” I’m giving Pitch Perfect 2 a 6.5 out of 10 on the Ross Watchability Scale (RWS).

I was never going to pay to see this movie so I hopped into a second theater after Jurassic World ended the other day to check it out for free. I didn’t want to pay for it because I assumed it was going to be exactly like an episode of Entourage, which had a run of eight seasons on HBO from 2004-11. And I was right…which makes reviewing this movie easy. If you liked Entourage for the most part when it was on TV, you’ll probably enjoy the big screen version. If you hated it, well, you probably already knew to skip the movie. We get to see Vince, E, Drama, Turtle and Ari doing their usual “this movie might ruin our careers” routine while minor characters from the TV version pop up left and right (Ari’s family, Lloyd, Dana Gould, Billy Walsh, etc). And we’re bombarded with celebrity cameos (Mark Wahlberg, Tom Brady, Russell Wilson, Gronk, Jessica Alba, Kelsey Grammar, Ed O’Neill, and so many more). Unlike the girl power Pitch Perfect, Entourage treats women like it always has: Pieces of meat to be hit on, joked about, screwed over, and discarded. I’ve seen a lot of people upset about this on social media in the past couple weeks. And to them I say, “What did you expect? It’s Entourage.” I’m giving it a 5.5 out of 10 on the RWS. It had enough going for it from a comedic and wow factor standpoint to make it worthwhile. Definitely not something you need to see in a theater, even if you were a huge fan of the show.

This is possibly the only movie of the four that you hadn’t heard about. It’s an action movie where The Rock plays the main character, a Los Angeles Firefighter who tries to save his daughter up in San Francisco when the entire West Coast experiences a devastatingly large earthquake. Listen, I’m seeing this movie for one reason: special effects (OK, two reasons: my high school obsession with The Rock still manifests itself from time to time). And the effects sucked. There was nothing interesting about the destruction that this massive earthquake caused. According to Paul Giamatti’s character, this was the largest recorded quake in the history of the world, and yet, the chaos and suffering was meh at best. What the fuck, San Andreas? You think I give a shit about the father-daughter relationship, or the fact that this family lost another daughter to a drowning accident years earlier. The two British supporting characters, while cute & funny, were not a main draw either. Give me the most ridiculous amount of shit blowing up and crumbling. Give me the earth opening up. Give me a tsunami that rivals anything we’ve ever seen. Give me something so I can at least give this movie a 2.0 on the Ross Watchability Scale. Do not give me a super slow sinking of a skyscraper into the flood waters where I know with 100% certainty that everyone’s going to make it out OK. As it stands, I’m giving San Andreas a 0.5 on the RWS, the lowest recorded rating in the history of this scale. 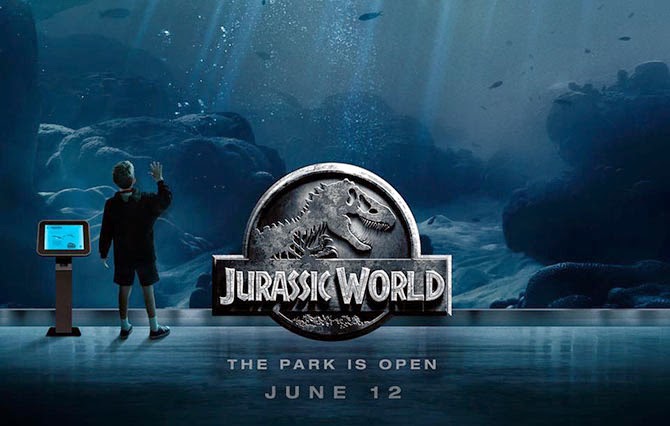 I don’t see many movies on their opening day, but I just had to see Jurassic World this past Friday. My excitement came from how much I enjoyed the original Jurassic Park back in 1993. I’m guessing I was the perfect age for that movie to be one of my favorites…a 10-year-old seeing an awesome dinosaur movie on a huge movie screen. I never saw the follow-ups to Jurassic Park, and you don’t need to have seen them either to enjoy this newest installment. Jurassic World takes place 20 years after the tragedy of the first story, in a time where they’ve been successfully running a dinosaur-based theme park for a while. In fact, it’s been around long enough that the main plot focuses on the operators of the park trying to engineer bigger, scarier dinosaurs to reinvigorate the public’s interest in the attractions. And of course, they make a dinosaur so big and so bad that all hell breaks loose. This conveniently happens on the same weekend where the park’s head of operations has nephews visiting. And if that sounds cliche, well, be prepared to get hit over the head with plenty of them (like that same head of operations being so focused on her career and making money for the park that she willingly puts her family and other park guests in danger). But aside from the usual problems with large-scale action movies (please don’t expect the dialogue to be riveting), Jurassic World was an awesome movie. The spectacle of it all and the special effects were fantastic. Even though the plots are never awesome in these movies, there were plenty of twists and turns to keep you genuinely interested even if you don’t like all the action parts. As with the original, it was really fun to see lots of minor characters and think, “I know they’re gonna die, but I can’t wait to see how and when.” Though the focus for most of the movie is on the humans trying to take down the highly-intelligent hybrid dinosaur that was cooked up in the park’s lab, don’t sleep on some awesome moments from the Velociraptors and T. Rex. Jurassic World gets a solid 7.5 out of 10 on the RWS. I will watch this one over and over again. So there you have it. Go see Jurassic World and Pitch Perfect 2 for sure. Entourage depends on your personal tastes. And San Andreas is awful for everyone.