I haven’t played fantasy football through Yahoo in several years. ESPN is my service of choice. But this year I joined a new league that’s being run on Yahoo. No big deal, all the draft applications are more or less the same at this point.

But at the conclusion of yesterday’s draft, Yahoo sent me this email:

Cool, right? They give me a nice compliment (“With a manager like you…should be in great shape”), and then they say my “C” grade is short for championship. Fuck yeah. Championship team guaranteed it sounds like.

Then I clicked the link to read my full report card (click on the pictures to make them larger): 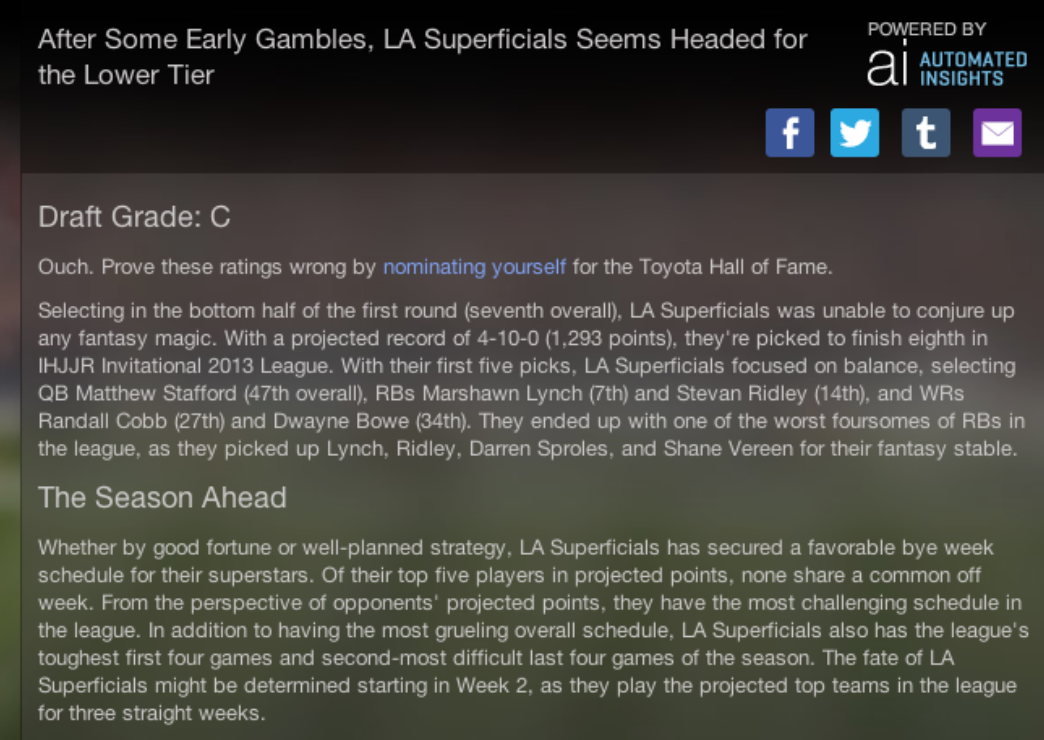 In case you decided not to read Yahoo’s scathing remarks about my team, I’ll give you the short version: Apparently the C grade does correspond to the typical letter grade scale where A is good and F is horrible. So it doesn’t stand for Championship after all? That was just their way of fucking with me in the email? And then they say I’m projected for a 4-10 record, 8th place in the league and called four of my running backs “the worst foursome of RBs in the league.” (Marshawn Lynch, Stevan Ridley, Darrent Sproles and Shane Vereen)

The final part of the report card that I didn’t attach to this post said that my strongest position is defense, where I selected Cincinnati. Fan fucking tastic.

So my question, obviously, is where the hell does Yahoo get off telling me to give up on the season before a single game is played? Oh right, because all of their expert player projections are always spot on. You’re right, Yahoo, you know exactly how many points each player is going to score each week, and you obviously know that my competitors are going to set the exact lineup every week that you think they should.

Maybe they’re just trolling me with this report card?

Obviously it’s a bunch of crap. On top of those four “worst RBs” I also grabbed Montee Ball and Bernard Pierce for depth, I have Matthew Stafford (guaranteed 5,000 passing yards) as my QB, Randall Cobb, Dwayne Bowe and DeSean Jackson as my starting WRs, and Fred Davis (accidental autopick) as my TE.

That’s championship caliber with a capital C. Any idiot can see that.

So after I win the championship in this league I’ll go back to what most of the world already does with Yahoo…completely forget that it exists.

One thought on “According to Yahoo, I Shouldn’t Even Bother Playing Fantasy Football This Year”