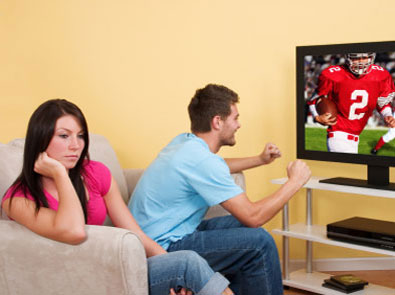 I could write my usual NFL recap column as if I was a full participant in the football viewing on Sunday, but I think you, dear reader, would see right through the lies. The ugly truth is that I haven’t been this distracted on a football Sunday since December 20, 2003, when I had to attend a family gathering at a bar and therefore couldn’t devote my full attention to the TV screens. That date is memorable because it’s when Joe Namath tried to kiss Suzy Kolber on live TV during a Patriots-Jets game. And I was robbed of hearing it in the moment.

Whenever I go for a weekend visit to San Francisco, I always end up in my brother’s man cave on Sunday to watch the games on his three TV screen setup. Typically there are four or five guys holed up in the cave for 10 hours, and the only topic other than sports that’s discussed is our annual Vegas trip.

So I thought I’d return the favor for my brother this past weekend because he was coming down to LA for a visit. I got the multiple TV part right as I setup my living room to represent a man cave as much as possible. But that’s where the similarities ended. For most of the day we “had the pleasure” of being surrounded by a puppy, a baby and four women.

I think you get the point. Even with two TVs, it felt like I watched no sports all day. As a Patriots fan it was an especially shitty day to not have my full attention on those games.

By the end of Sunday my brother had sworn to never again come to my place for a sporting event, and all the women were mad at me for hogging the apartment and the TVs for 10 hours.

Even if the environment around me had been ideal for football on Sunday, I have a feeling it would have been particularly difficult to put in the time necessary for a full breakdown of all the games, mostly because this was dominating my thoughts Sunday night and the better part of Monday:

It’s not all bad news for my readers though. You get a break from the weekly homework assignment of trying to make it through my 4,000 word recap column before passing out from boredom. So in a sense, while these women were doing me no favors on Sunday, they were doing you a huge favor. I’ll send them your thanks the next time they invade my Sunday Sanctuary.

Week 7 picks coming up on Thursday.