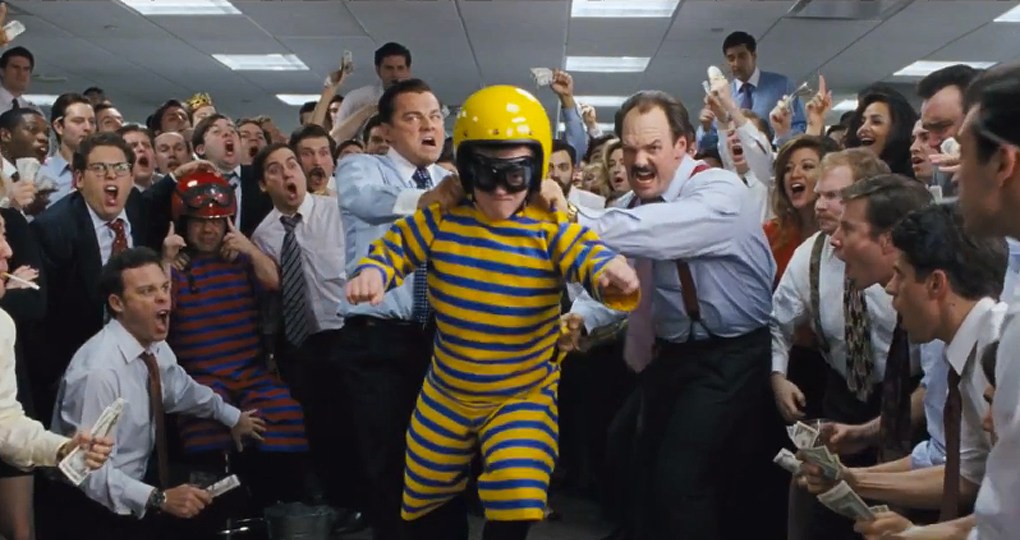 I’ve been sitting on this Wolf Of Wall Street blog review for a couple weeks because I have no idea where to rank it on my world-renowned Watchability Scale. Sometimes I think it’s a brilliant movie. Other times I think it’s terrible. But I’m probably going to play it safe and rank it somewhere in between those two extremes.

The best, yet vaguest, description I can give is that it’s like nothing you’ve ever seen before.

Since I saw it in early January and was fooling myself into thinking I’d start dieting for my New Year’s Resolution, I went into this movie telling myself I would only eat one Peanut M&M each time Leonardo DiCaprio’s character partakes in illegal drug activity. I ended up in the hospital after the first hour with what the doctors described as an aggressive case of chocolate poisoning.

For those who have seen Boiler Room, I can only imagine Wolf was dreamt up by someone watching that film while doing a bunch of cocaine and quaaludes. And then he decided, “What if the main character was as fucked up throughout the entire movie as I am right now?”

For those who haven’t seen Boiler Room, Wolf is a movie about an ambitious young stock broker, Jordan Belfort, who finds ridiculous success in the 1990s by participating and then running an illegal stock brokerage. He and his colleagues make such a crazy shit ton of money that they can afford to throw parties with booze, drugs, midgets and hookers almost nightly. And then the FBI starts investigating them and the whole damn thing unravels.

A few interesting notes from the different Wikipedia pages I explored in order to research this movie:

My biggest problem with the movie is its three-hour run time. Here’s how it breaks down:

So if you only have two free hours but really want to see this movie, go for it. You won’t miss a thing.

And that first 60 minutes, the funniest hour in movie history, is anchored by the single greatest scene in movie history (from a comedy standpoint). For those of you who have seen Wolf, I’m talking of course about the lunch date between Leo and Matthew McConaughey. There’s no way to explain what goes on except to say that McConaughey’s character baptizes DiCaprio/Belfort via an extremely strange ritual. These five minutes alone are worth the price of admission.

You should see this movie if: You want to see some of the funniest yet craziest shit any movie has ever tried to pull off; you (like me) have seen every movie Leo’s ever been in minus The Man In The Iron Mask; ditto for seeing every Scorsese movie; if you love McConaughey, even though he’s only in the movie’s first 45 minutes; you love films about excess, flawed characters and an epic crash & burn; you’re able to take serious subject matter lightly.

You should not see this movie if: Pretty self-explanatory, isn’t it? If the drug-fueled exploits of a womanizing criminal isn’t your cup of tea; if swear words, specifically FUCK, make you uncomfortable; more importantly, if copious amounts of breasts and vaginas on the big screen make you uncomfortable; if you don’t like to see bad people prosper; if you or someone you’re related to got jobbed by the real Jordan Belfort’s fake brokerage in the 90s; if you hate humor; if you’re a super serious person who can’t take a light approach to an immoral film.

While the final third of the movie is nearly unwatchable, I’m still giving Wolf of Wall Street a 7.5 out of 10 on the Ross Watchability Scale (RWS) because humor triumphs over boring tragedy in my opinion.

When I returned to work from Christmas break, several of my coworkers had seen both Wolf of Wall Street and American Hustle. All of them agreed that Wolf was significantly better. Those people are certified morons. If you’re choosing which Oscar-nominated film to see this weekend between the two, please do yourself a favor and see American Hustle. But sometime shortly after that, go see Leo play the Big Bad Wolf.