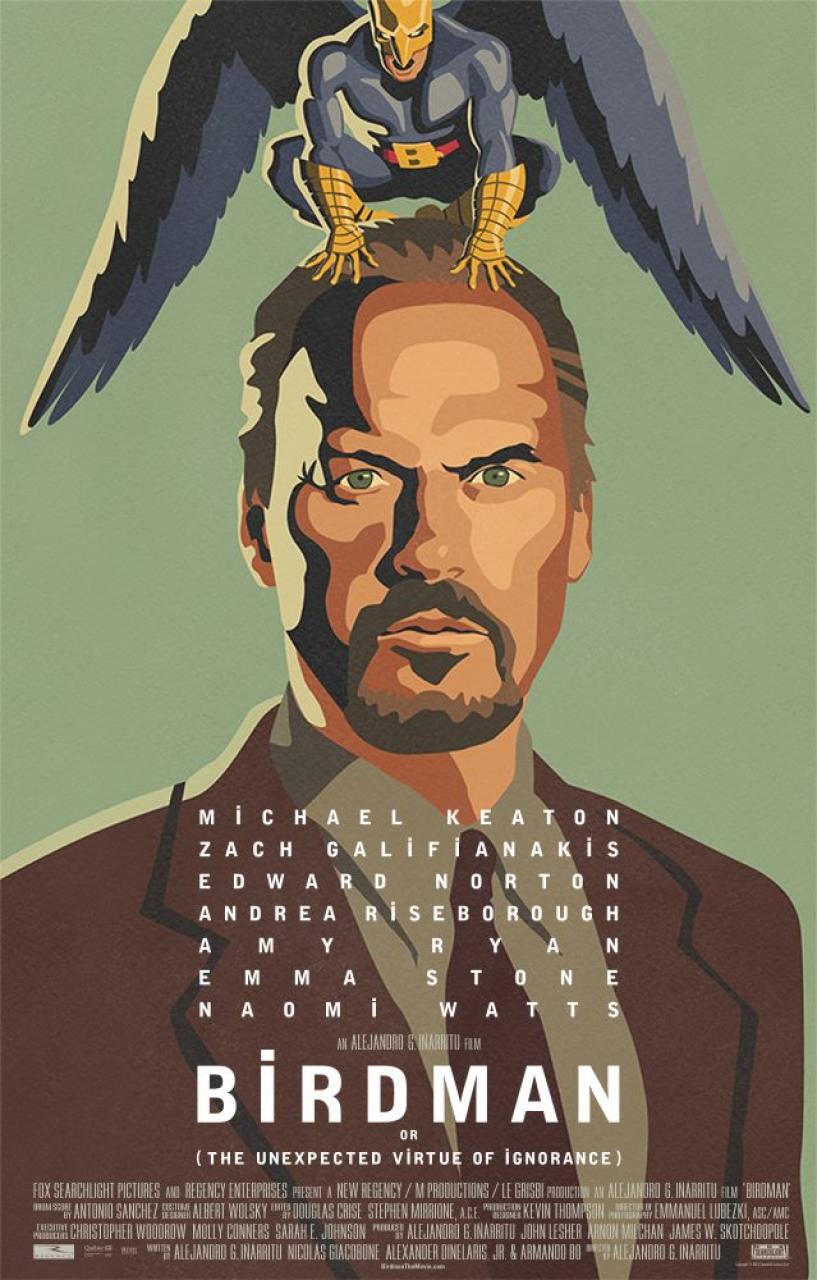 Normally I wouldn’t be first in line to see an under-the-radar black comedy about a washed-up Hollywood star who’s battling demons—real and imagined—while trying to write, direct and star in a Broadway play just to announce to the world that he’s still relevant.

Normally I wouldn’t be the second in line, the 12th, the 100th or even the 10 millionth for a movie like that. But over the past couple weeks, everywhere I turned, I kept hearing the whispers about this incredible little film starring Michael Keaton as Riggan Thomson, the main character trying to restart his career (or put on his final act…it’s definitely ambiguous as to what his ultimate goal is with opening a Broadway play).

We’re into November now, which means movies with Oscar aspirations are finally being released in theaters. The buzz over Keaton’s performance is what got me into a theater this past week, and that buzz is 100% deserved.

Birdman is the name of the movie because it’s the name of the fictitious Superhero that Keaton’s Thomson played in three hugely successful movies 20 years earlier. Then he walked away from that career-making & fortune-making role, and presumably he vanished from the A-list for the next two decades.

It isn’t too big of a leap for people to think about Michael Keaton’s career as a parallel to this storyline. He starred as Batman in the late 80s/early 90s, but walked away from the franchise after two films. We all know subsequent Batman films have gone on to make a ton of money over the last 20 years, and Keaton hasn’t really been relevant for a long time now.

Even though Keaton says in this interview that the main character’s backstory in Birdman couldn’t be any less similar to his real life, you can’t help but make the comparison while watching the onscreen Riggan Thomson in action.

This movie is so much more than “struggling actor tries to save his career by performing on Broadway.” It has many layers. Thomson and his best friend/co-producer Jake are nearly out of money before the play’s opening night even arrives. (Finally! Zach Galifianakis plays a character that doesn’t just feel like a regurgitated version of his role in The Hangover films.)

When they need to find a last-minute actor to fill a major role in the play, they’re ecstatic to land Broadway veteran Mike Shiner (Edward Norton), but that ultimately comes with problems. First, in order to pay Shiner’s ridiculous salary, Thomson has to refinance his Malibu home that was supposed to be given to his daughter one day (she’s a recovering drug addict played by Emma Stone). Then Shiner starts to steal the spotlight and go rogue on the script.

The revolving love triangles among the cast and crew are minor conflicts compared to Thomson’s internal demon. He can’t get the voice of Birdman out of his head. It’s the voice that’s repeatedly telling him he doesn’t need this Broadway play or the hassle it brings. He’s a star. He grossed more than $1 Billion worldwide.

All the pressures and issues facing Thomson come to a head when the play is running its final preview, a showing attended by the New York Times theater critic Tabitha, who has the reputation of either making or breaking your success on Broadway.

What happens in the movie’s final 30 minutes will make you laugh, cry and walk away extremely satisfied.

You should see this movie if: You love artsy indie movies; you like black comedies; you want to see a movie that’s totally unique and original compared to a lot of the repetitive junk that the studios usually put out there; you’re OK with laughing and crying at the same time; you’re a big Michael Keaton and/or Edward Norton fan; you’re into Broadway and want to see a somewhat fictitious take of what goes on behind the curtain; you want to see what will most likely be an Oscar-nominated performance (Keaton’s for sure).

You should not see this movie if: You only like films that have lots of action and a ton of special effects; you couldn’t possibly picture liking an artsy movie; you only like comedies that are pure laughs and don’t have any drama; you hate Michael Keaton and/or Edward Norton; just thinking about plays and Broadway makes you start yawning.

On the Ross Watchability Scale, I’m giving Birdman a 7.5 out of 10. The acting is incredible throughout and the plot actually held my attention a lot better than I was initially expecting. I’m very glad to have heard that buzz that got me into the theater for this one.

One final note: If you’re considering a few different movie options for this weekend, you can compare my thoughts on Birdman with two other movies that should still be in the theaters: Gone Girl and Fury. Of course, there’s a very strong chance that you’re seeing Christopher Nolan’s Interstellar on its opening weekend, but if you want to avoid those crowds, check out one of the three movies above.

One thought on “Movie Review: Birdman”