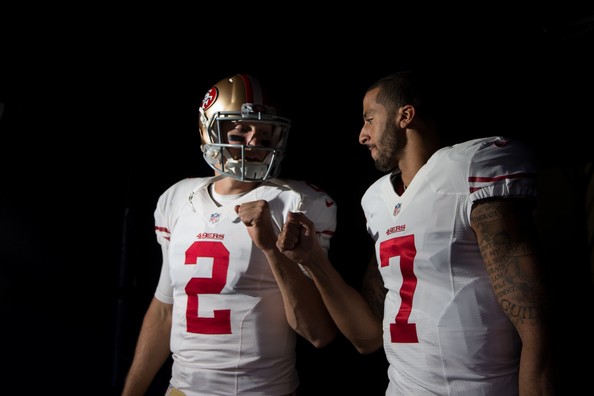 Another week, another round of shakeups on the quarterback and coaching fronts. For those keeping score at home, here were the major moves:

At least these terrible teams (collective record among the four of them: 8-23) went ahead with some major changes. The problem is they probably replaced those underperforming players/coaches with guys who are equally bad or worse. You can imagine that a few of these teams will be in the mix for the first overall pick in the 2016 Draft.

In looking at the current NFL standings, you can make the case that the AFC is going to be a bit boring for the remainder of the year. Three of the four division titles are locked up while the one that is still being contested is too much of a travesty to want to pay attention to.

Over in the NFC, I think the two most important teams this week are Atlanta and Minnesota. They are in second place in their respective divisions, and losses by each of them while the 1st place team wins, would pretty much lock up two more divisions (Carolina over Atlanta in the South, Green Bay over Minnesota in the North). So if you want as many divisions as possible to come down to the wire, you’re definitely rooting for the Falcons and Vikings in week 9.

Let’s get into the picks.

For people who think the Bengals win or lose purely on the arm of Andy Dalton, we’ve reached that critical point in the team’s 2015 schedule. Five of Cincinnati’s next eight games are in Primetime. The Bengals are 7-0, have won nine or more games in each of Dalton’s four seasons as the starting quarterback, and have gone to the playoffs in every year of his career. But it’s the 3-7 Primetime record and four straight one-and-dones in the playoffs that everyone uses as proof that he’s no good.

So here you go, Andy. This week starts three games in a row under the bright lights. At least the Bengals get to ease into this portion of the schedule with home games against the Browns and Texans before heading to Arizona in week 11 for Sunday Night Football.

Going into week 9, I’m one of eight people remaining in my Survivor Pool. My only decent choices this week are: Cincinnati, New Orleans, Denver and Atlanta. I probably haven’t stressed about anything this much in 10 years. Seriously. After careful examination of all factors, I have to go with the Bengals. But there’s a lot of hesitation in this choice because of the following: Dalton’s history in Primetime + Thursday night game weirdness + Johnny Manziel x-factor + my ridiculous inability to pick the Thursday games this year (0-7-1 against the spread on the season).

Just win, Cincy. Even by one point. Just win.

If Cincinnati had gone to Denver last week and come away with a similar result, there’s not a chance in hell they’d be favored at Carolina a week later. But our love of the Packers and Rodgers knows no bounds, apparently.

I fully expect a push in this game, but I’ll lean towards the Packers because 1) Denver seems like a more legit 7-0 team than Carolina does, 2) It’s tough to picture Rodgers and company losing two in a row, and 3) We really need to keep whittling down the undefeated teams because this is absurd to still have four of them at this point in the season.

These reasons suck, but you tell me how to figure this game out, OK?

Washington’s not winning this game. They’re 0-3 on the road and playing a team that is about 500 times more talented. So how much will they lose by? Exactly 20 points.

Talk about nailing the intro to last week’s picks column! I predicted all four AFC South head coaches will be fired by season’s end, and we’re already 1/4th of the way there! I mentioned that Whisenhunt was relieved of his duties after probably solidifying his status as the worst coach of the last 20 years. Chuck Pagano is only still alive because he killed Pep Hamilton (figuratively speaking). It seems like the AFC South teams’ owners are finally coming around on what we’ve all known for a while: THEY ALL STINK.

And no team stinks more than the Titans. It doesn’t matter if Marcus Mariota or Zach Mettenberger is the starter. Tennessee has put up 36 points since September 27th, total. The Saints’ week 8 performance would have beaten the last four weeks of Titans output by 16 points!

Here’s a fun way to determine which of these teams is better: Pretend their wins against the putrid AFC South don’t count, and then see what their overall records are. So for Miami, they’d be 1-4 (taking out two wins: at Tennessee and home for Houston). Buffalo…would also be 1-4 (taking out a home win against Indy and a road win at Tennessee). DAMNIT! That did nothing.

But Buffalo already won in Miami earlier this year. Now they’re in upstate New York and it’s the time of year where the weather is getting bad. Oh, also, the Bills just had a bye and got Tyrod Taylor and other contributors back to full health. Sure, fine, there’s some reasons to pick the Bills.

Hey, look, it’s everyone’s preseason darlings! Yes, both of these teams were being targeted as “2015 playoff sleepers” as early as last December, and to this point, neither team has disappointed. The Vikings are 5-2 and the Rams are 4-3. But not all wins and losses are created equally. The Vikings have faced one team with a winning record, the Broncos, and lost that game. Their other opponents: San Francisco, Detroit, San Diego, Kansas City, Detroit again and Chicago. Not exactly a murderers’ row.

At least the Rams have had to face multiple contenders through the first two months (they beat Seattle and Arizona and lost to Pittsburgh and Green Bay). I think the Rams do a couple things really great, specifically rush the passer and run the ball. I don’t think the Vikings do anything as good as the Rams do those two things. Give me St. Louis as Todd Gurley comes even closer to locking up Offensive Rookie of the Year honors.

Is this line Jets -7.5 or Jets -2.5? I honestly can’t figure it out. After the Jets announced on Wednesday that Ryan Fitzpatrick would be the starter on Sunday, one sportsbook moved the Jets to -7 and a couple others kept them at -2.5. So I’m using the one that benefits me the most.

The Jets might not be as decent as we first thought, and therefore I don’t like them against anyone at the going point spread.

You know what’s pretty awesome through eight weeks? Two of the three teams that are rumored to be moving to LA in the offseason are 4-3 and contending for a playoff spot (St. Louis and Oakland). I’m in favor of anything that might even slightly embarrass the NFL so I’d love to see the Raiders and Rams play January football.

Of the Raiders’ three losses, one was by two points at Chicago and the other was by six against Denver. Imagine if they had won either of those, or both of them!! This team is fun, semi-legit, and will definitely be America’s favorite underdog if they can continue to hover around .500.

Giants on the road? No thank you.

Besides, they have to look kind of bad in this game so we can all bet huge on the Patriots in New York next week only to have the Giants play inspired, maybe even amazing, football. We will all lose money if we bet the Patriots in week 10. Mark my words.

You know what Peyton Manning and the Denver Broncos have that the Colts lack?

I don’t care if Manning is back to worst-quarterback-in-the-league status on Sunday. Their defense and their ability to outsmart an idiot organization like Indy will get them a win by a touchdown or more. Easy decision.

This was one of my toughest decisions of the week, and I’m probably going to regret siding with Matt Cassel, but I think Dallas has enough talent at the non-QB positions to keep up with the Eagles. I know collectively we all love to watch the Cowboys struggle, and them falling to 0-6 without Tony Romo would certainly be fun to see, but I gotta think they win one at some point. I wasn’t sold on Philly from the beginning of the preseason and nothing they’ve done through eight weeks has changed my mind. Is Sam Bradford even better than Cassel? Is Philly’s defense really as good as it’s currently ranked? I think the answer is no to both questions. Go Cowboys.

This is so easy for me because I promised myself several weeks ago I will never pick the Chargers if they are favored by more than three, regardless of where they’re playing and who they’re facing. Done and done.