Three days after seeing the Ben Affleck-starring Gone Girl, I’m still trying to process it all. That’s one reason why I can’t possibly give a full review. The other reason is that I’m terrified of inadvertently spoiling the movie for you. There are so many intricate plot twists in this mystery that anything I tell you could provide more information than you’d want before seeing it.

I’ll simply tell you that it was awesome. That it was the first movie in a long time that made me want to stand up in the middle of the theater and ask the theater operators to pause the film so I could take five minutes to think about what I had just seen. And if I had my way, I would have done that two or three times throughout Gone Girl. It was just such a cool movie. 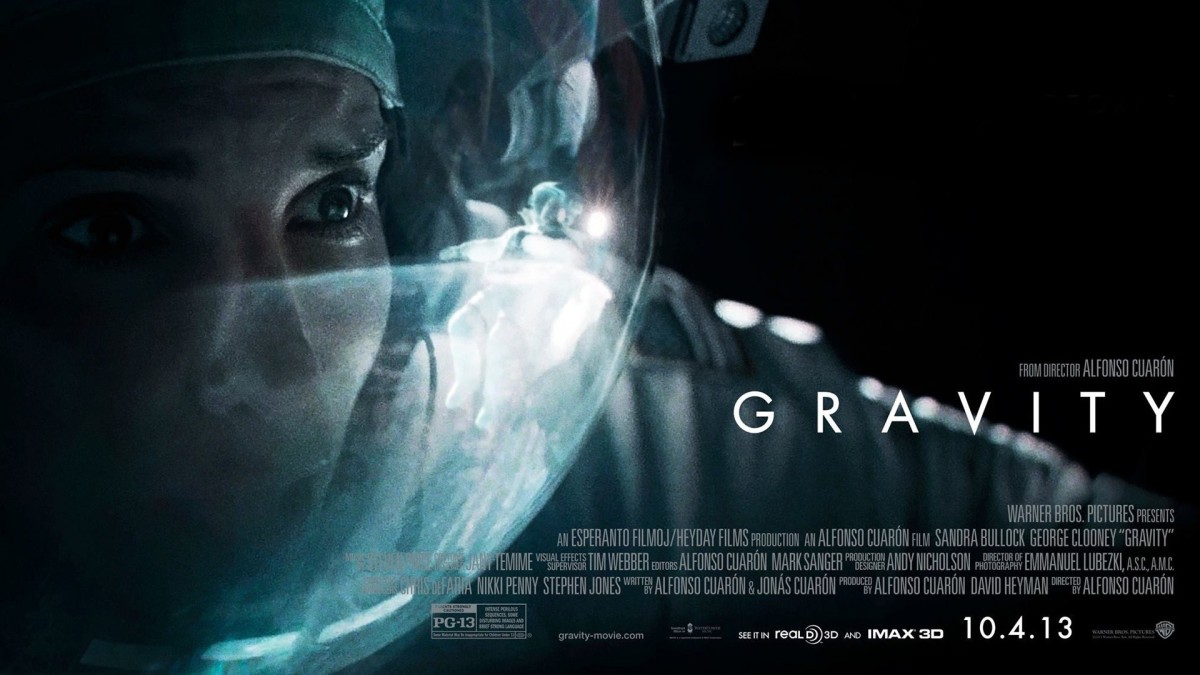 So what’s the deal with that movie where Sandra Bullock is floating around in space? You know, the movie whose previews have given us nothing beyond “Sandra Bullock is lost in space.” The one that George Clooney’s rumored to be in even though you never see him in the previews or on any of the movie posters.

For my benefit and yours, I went to check it out this week in my favorite time slot: Tuesday afternoon, where I’m joined at the theater only by retired people and criminals trying to duck out of the public spotlight for a couple hours.

The movie is a sci-fi/thriller called Gravity. It stars Sandra Bullock as a bio-medical engineer making her maiden voyage into space to fix part of the Hubble Telescope. If a movie about things gone wrong in space automatically makes you think of Armageddon, then Bullock would be playing the Ben Affleck role. And that means George Clooney is channeling his inner Bruce Willis, playing the old grizzled veteran making his last expedition and helping the scared protege get through a rough first experience.

Gravity is actually nothing like Armageddon, so please don’t be scared off by that comparison. One blockbuster that I’ve heard people comparing it to is Castaway. That makes a little sense because both films start off with an unsuspecting person getting stranded in an unknown, almost unsurvivable place. But the similarities end there. While Castaway overwhelms us with the human side of the story—Tom Hanks’ primal struggle for survival on an uninhabited island with no companion and no real hope of returning to his loved ones—Gravity overwhelms us with the brilliance and tension of being lost in space.

To put it another way, we don’t care as much about the characters and what’s in store for them if they get home safely in Gravity as we do in Castaway.

Instead we focus on the in-the-moment plot. Is the satellite debris going to hit their shuttle? Does the escape pod have fuel? What happens when her oxygen runs out?

And the best use of 3-D I’ve ever seen…we focus a lot on that too. I’m not exaggerating when I say it’s the best 3-D movie I’ve seen from a visual standpoint. Yes, better than Avatar. It’s just the perfect movie for that technology. If you have the option to see this movie in 3-D and you choose not to, I hope you regret it for the rest of your life.

You should see this movie if: You loved Apollo 13. You enjoy suspension-filled thrillers. You are OK with a little “odd couple buddy adventure” mixed into your serious movie. You’re obsessed with all things Sandra Bullock. You seek out movies that are visually captivating. You appreciate a movie whose broad subject matter can be whittled down and focused on just the important 90 minutes. You want to see 3-D used on the exact right movie.

You should not see this movie if: Getting a full cavity search sounds more pleasant than sitting through a sci-fi space adventure. You couldn’t care less about 3-D and the visual aspect of a movie. You have it out for Sandra Bullock and think she probably drove Jesse James to cheat on her. You know you’ll obsess the whole time over which plot points are realistic and which aren’t (for example: Is it realistic that an astronaut would be able to use a shuttle’s backup landing thrusters to propel her nearly 100 miles to a very specific landing spot on the Chinese Space Station? I don’t know and I don’t care).

Speaking of 3-D, it turns out they accidentally showed us the first 20 minutes of Gravity in 2-D, but no one had spoken up or complained by the time a theater employee announced that they were restarting the movie in 3-D. How does no one in a group of 30 people complain about this screwup? You’d think people had to notice it. There’s a pretty big difference between the two viewing experiences. What’s my excuse? Well I hate admitting this, but when I was growing up I could never do those “Magic Eye” optical illusion things. I’d stare at them in the mall for hours and would eventually start crying when I couldn’t see the 3-D image like all the other kids (it was always a stupid fucking dolphin in the middle of the poster). So even though those first 20 minutes of the movie looked off to me, who was I to speak up? The guy who can’t even see a hidden image that most 3rd graders can figure out was going to complain about not being able to see the 3-D movie? And risk being told that it is, in fact, in 3-D already? No thank you.