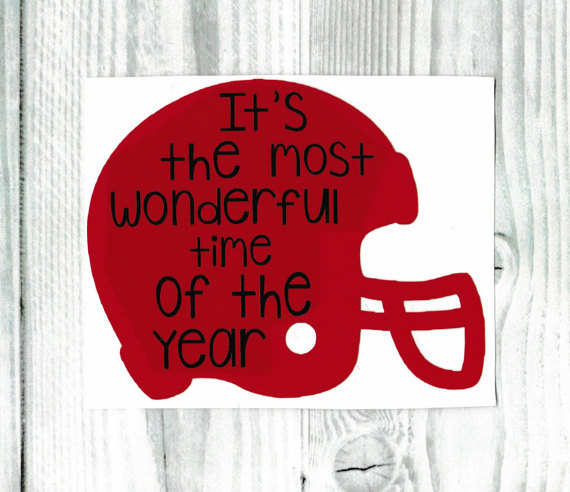 It really is the best time of the year for a sports fan. The 2nd month of the NFL & college football seasons have begun. October baseball has already shown up in a HUGE way with dramatic Wildcard games from each league earlier this week. We’re less than a week away from the NHL regular season starting, and under 20 days to go until the NBA tips off.

Apologies to the month of April—who many argue is the best sports month because we get NBA, NHL, the end of March Madness, the start of baseball, and The Masters—but not having the NFL going on during that month is an automatic disqualifier.

So be sure to warn your significant other that it’s not just Sundays, Mondays and Thursdays that you have to be parked in front of TVs. Every day brings a valid excuse not to spend quality time with your loved ones for the rest of this month. Enjoy it because soon enough the holidays will be here and there will be more family time than you know what to do with.

Let’s dive into the week 5 games.

The way this works is: Everyone found out on Wednesday that Carson Palmer’s out and Drew Stanton will start in his place on Thursday. Then the retweets started circulating with stats to show how awful Stanton has been recently and over the course of his career. By Thursday afternoon, everyone will have jumped on the 49ers noting how +3.5 is such a great number, and they’re in a good spot at home, on a short week, with the opponent’s backup QB starting.

But we’re all gonna walk away from this game reminding ourselves that the 49ers are really crappy and the Cardinals on a bad day are still a lot better.

Let’s say Stanton somehow leads the Arizona offense to a 30-point output on Thursday night, wouldn’t this situation be ripe for a QB controversy? Wouldn’t there be an instant groundswell of people wanting to see more of the Stanton offense and less of the Palmer-over-his-last-10-games offense? I believe this comment is ground zero for stirring up the pot in Arizona. Would like to see it go viral.

This line is absolutely ludicrous. And though I know how big of a collective idiot the betting public is, I’m still shocked that they’re clearly taking the bet and backing New England. This line opened at New England -7.5, has climbed to -10 or -10.5 in the pro books, and the public has taken it all the way to the current, ridiculous line.

Honestly, why wouldn’t you include the Browns in a 3-way tease where you get them at +21.5? If you can get any NFL team at +21.5, you automatically do it.

I haven’t been this confused by a line in a long time.

In three games, the Eagles put up: 29 points (on the 25th ranked defense, Cleveland), 29 points (on Chicago, 17th) and 34 points (on Pittsburgh, 18th). The Lions happen to be the 32nd best defense…dead last. The Eagles are coming off a bye.

And somehow Philly’s only expected to put up 24 points?

I say they get to at least 27, and since Philly also has a top five defense so far, I think they hold Detroit to 17ish and easily cover the tiny spread.

So here’s where I’m really confused: Last week Chicago put up all of 17 points at home against Detroit, the worst defense in the NFL according to FootballOutsiders. By doing that, the Bears offensive efficiency–again, according to FootballOutsiders–jumped 10 spots from 29th ranked to 19th. Since I always lob in DVOA stuff when it supports my arguments, I felt obligated to show you an example where it seems to make no sense.

Anyway, if this Bears team was literally any other team, I’d love to bet them straight up with confidence. The Colts are the first team in NFL history to have a game scheduled the week following a game in London. No bye for them. These past 10 days were probably pretty grueling and I wouldn’t be at all surprised to see a solid amount of laziness from them on Sunday.

But can the Bears really take advantage of all that? That’s the million dollar question. Ultimately I’m picking the Bears purely because I think Vegas is going to need them to cover and I’d rather be on the side of Vegas in this particular situation.

You wanna take the easy way out on this crappy game and just assume Miami being distracted all week by a gigantic fucking hurricane heading their way is setting them up to be wholly unprepared for this game? Yeah? Me too.

By the way, the under is pretty much a lock.

Pumping the brakes on this Ravens resurgence is just about the easiest thing to do. Their opening schedule looks even more laughable than it did four weeks ago. And their week 3 game against Oakland–a 28-27 Raiders win–seems more representative of how this one should play out against Washington.

Even if you’re confident that the Ravens are better, they’re just not the type of team that’ll be blowing opponents out this year. You can take the Washington +14 to the bank (where they’ll promptly tell you that they don’t cash sports bets and send you away).

As my podcast partner Maty Sugs continues to rise from his untimely gambling death last week, he pointed out to me that Houston has scored five offensive touchdowns on the year, while the Vikings have gotten into the endzone six times (ranking them 32nd and 31st in the NFL, respectively). If you tease this under to 50.5, you’re forcing these teams to combine for 7+ touchdowns. That feels like a near impossibility. Go ahead and tease the under.

And yeah, the Vikings should move to 5-0 so I’m putting them into a 2-way tease.

I don’t care if this is an obvious spot for the Jets to surprise everyone and play a competitive game. I can’t possibly pick them because Ryan Fitzpatrick has a 4/10 touchdown to interception ratio, a quarterback rating of 57.6 and a completion percentage of 55.8 (and drops to 51.6 if you take out the one game where they faced a below average defense).

I joked on this week’s Teasy Money Podcast that we might see a 70-0 beatdown by the Steelers. But realistically I think it’s your run-of-the-mill blowout, something in the range of a 14-point win for Pittsburgh.

I’m unwilling to touch the over/under, and I don’t see why I’d bet Pitt at -7.5 when I can get them in a teaser.

Of the five games this weekend where both teams are 2-2 or better, this should be the most fun one to watch. That’s because rather than Denver’s defense completely shutting down Atlanta on their way to a low-scoring win, I’m hopeful this will go the other way and Denver will have to put up 30 to just barely squeeze by the Falcons. Maybe I’ve been roped into another moment where Atlanta will pull the rug out from under me, but I think they can slowly wear down Denver and find some weak spots.

I can see why you’d think this will be on the lower scoring side, but I have a gut feeling on the other side. Bet the over, stay away from choosing either team.

I initially expected a tight game with Cincy winning, but upon further review I think Dallas is actually the better team. The Bengals have played uninspiring offense outside of a couple big A.J. Green games. And now with Tyler Eifert reportedly having a setback in the form of a back injury, I don’t see the offense turning a major corner anytime soon.

And Dallas really feels like a team built not to suffer any blowout so I love teasing them in case they play a little worse than I’m expecting.

These two teams appear to be doing the exact opposite of what we expected going into the season. Yeah, the Bills at 2-2 aren’t a major surprise, but common sense would have had them beating Baltimore & the Jets and losing to Arizona & New England. But they went opposite on us. And the Rams are 3-1 while I absolutely expected a 1-3 start with them only beating the 49ers (they one team they’ve actually lost to).

Since I don’t find any excitement in either team and I have no interest in betting on this game, that analysis is good enough for me. Since the Rams should win this game, I’m going with Buffalo.

This game is really simple. Of their combined eight games played so far, only one has been decided by more than a touchdown (a Chargers win over the Jaguars in week 2). So you can count on another close game. If betting San Diego straight up at +4 worries you a little, then I suggest you tease them to +10/+14 or tease Oakland to +6, because you know this game isn’t ending in a blowout.

It also feels like teasing the over down to 40 in this game is a great move because the non-teased over has hit in three out of four games for each team so far.

And finally, congrats to Oakland for getting through an opening month that saw them play three road games in the Eastern time zone and win all three. That’s quite the feat.

Well would ya look at that? It seems the public has gone ahead and driven the Packers up to a stupid number once again. What an easy game to dissect as a professional bettor. The Giants just looked like dogshit on national TV on Monday night (recency bias!) and the Packers are irresistible to the masses especially when coming off a bye.

But what I see is a team not quite as good as Minnesota facing a now-desperate Giants team. And at the very least, if I bet the Giants now, the backdoor cover is totally in play. Seems like an easy choice.

My only hesitation is that the Giants have the most thin-skinned player in the NFL on their team and he might just do something dumb enough to swing this entire game. Wildcard behavior is never good when gambling.

This is the second week in a row where a game still doesn’t have a point total as of Thursday afternoon. That’s wild.

Obviously we’re waiting on news regarding Cam Newton’s health. It looks like he missed practice on Wednesday while dealing with concussion symptoms. Lucky for Carolina, this is a Monday night game so they have an extra day to figure things out.

But I don’t get extra time to figure it out. And that’s fine because I couldn’t make sense out of these two teams if you gave me a month to do research. I’m just going to assume that Sunday night’s game between the Giants and Packers will be exciting & competitive, and you know how the NFL works…we can’t possibly have back-to-back good games in Primetime. So that’s the only reason I’m picking the Panthers by double digits. Please don’t follow my advice on this one.