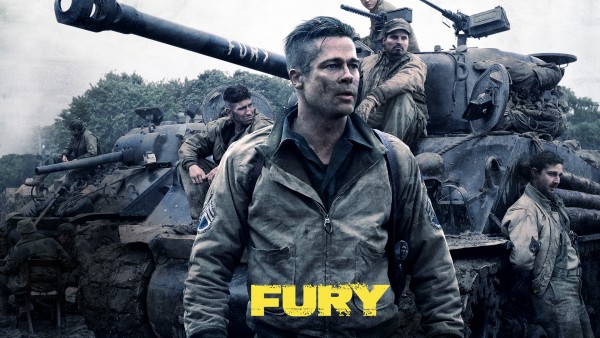 Wasn’t there a time when every film starring Brad Pitt would be released with a lot of fanfare and media coverage? Nowadays it seems like only one out of every handful of his movies gets any type of publicity.

In fact, his perfect appearance on Zach Galifianakis’ “Between Two Ferns” earlier this week got a lot more buzz than anything else he’s done recently (And I highly recommend watching that five-minute skit. You won’t be disappointed).

I almost forgot there was a new movie featuring Mr. Jolie out in the theaters when I stumbled upon Fury the other day.

And good thing I found it. What a cool little World War II flick this is!

It’s simple, focused, uncomplicated and limited to just a few main characters. I suppose most WWII movies have a pretty narrow scope. You can’t really tackle the entire war in a two-hour film.

Fury focuses on the end of the war, when the Americans are marching on Germany. The story follows a tank and its crew, led by Pitt’s Staff Sergeant “Wardaddy”, as they try to hold off the Germans at a critical crossing where the Allies are moving their supplies.

More important than the step-by-step plot is the men inside the tank. Five soldiers with differing levels of experience, four of whom have been together in this tank (named “Fury” by the way) since the war began.

The fifth guy? That’s where all the drama comes from. His name is Norman Ellison, and he’s the baby-faced war virgin (and possibly sexual virgin) who recently enrolled in the army to be a typist, not a driver of a tank, and certainly not a combat soldier. But he’s thrust into this situation, and as you’d expect, he’s immediately in over his head. He’s never been in combat, never killed a man, and doesn’t seem like he belongs in any way.

His “orientation” happens as Fury leaves an Ally base and moves into hostile territory. Bonds among men are formed, lives are lost and very cool war battles are fought. This is not a war movie that has the typical slowness to it. These guys are in danger the entire time, and the movie makes sure we feel that suspense and anxiousness throughout.

You should see this movie if: You love war movies, especially WWII stories; you worship Brad Pitt and all that he does; you like watching two hours of film where there’s a ton of action and only a little character development; you like cool battle scenes; you like your movies as gritty and grim as possible.

You should not see this movie if: Graphic images, specifically dead bodies and severely injured body parts, make you sick; you’re simply not a fan of war movies; you like your films to have female actresses with significant roles; you require the happiest of happy endings; you like those movies that have tons of character development and backstory; you only like comedies.

On the Ross Watchability Scale (RWS), I’m giving Fury a solid 6.5 out of 10. I’m not the world’s biggest war movie fan so it would be tough for me to put anything in this genre much higher than a 7 or 8 anyway. If you read my review from earlier this week on Gone Girl, then you know which of these two films I’d recommend you see in the theater this weekend.

[Editor’s Note: With my blog exploding in popularity across the globe, it shouldn’t be a surprise that other bloggers are trying to snatch me up. Starting today, I’ll be lending my genius creative services to the Baltimore-based sports & pop culture website I Hate JJ Redick. Specifically I’ll be doing movie and TV reviews for them as well as some football posts. Apparently they were willing to accept me regardless of my palpable hate for the Baltimore Ravens. Any time I do a blog post for them, I’ll be sure to post it on my own website too. That way no one misses my stuff while ensuring I don’t have to put in any extra work.]

World War Z has been in the theaters for three weekends, but you’ve had no urge to see it, right? I get where you’re coming from. On the one hand, it’s already the most successful movie of all time in its genre, and it stars an up-and-comer named Brad Pitt. But on the other hand, it’s a zombie film coming out at a time when we’re starting to get a little worn out from all the zombies invading our movie and TV screens. WWZ also did little to differentiate itself in the pre-release marketing from the somewhat tired plot of “normal guy suddenly becomes the only person who can save mankind from certain extermination.”

I finally dragged myself to see it the other day (movie-going is a key procrastination tool for the semi-employed writer), and I gotta admit, my low expectations were exceeded by a long shot.

The movie’s main question isn’t so much about whether the undead will take over the world, but rather how Brad Pitt will eventually find a cure for or put a stop to the madness…because you just know he’ll figure it out eventually. And the movie’s writers were kind enough to tell the audience in the beginning that we should be looking for clues along with Pitt to figure out the zombies’ weakness. So it’s a fun little scavenger hunt to see if you can come up with the solution before the protagonist does.

You should see this movie if: You’re OK with Brad Pitt dominating a zombie movie (the zombies just aren’t given that much screen time); you enjoy a traditional hero movie where the main character does everything perfectly: he’s the best fighter, the bravest man, the greatest husband and father, and of course he’s the smartest guy involved; you want to see the most absurd example of someone shooting himself since Plaxico Burress’s waistband let him down in November 2008. 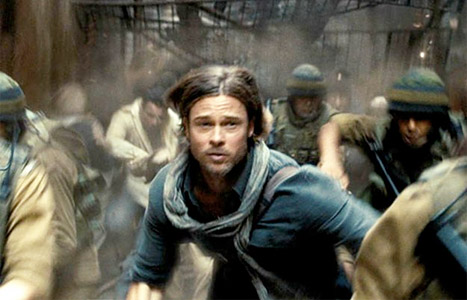 You should NOT see this movie if: You’re going to be bothered by the fact that Brad Pitt’s scarf stays perfectly slung around his neck while he spends the entire movie fighting off zombies (after much consideration, I think it’s an infinity scarf, so it’s not that impressive after all); you’re one of those people who spazzes and jumps out of your seat every time a character (or zombie) pops up on the screen unexpectedly; you’re a zombie snob who can’t enjoy the movie unless the zombies function exactly how you believe real zombies would act.

And if sequels are your thing, well I have a feeling we’re only two years away from seeing the trailers for World War Z2? The Second World War Z? World War Z+1? Based on the way this movie ends, there will definitely be at least one sequel.

There’s a lot more story to tell, and depending on your love or hate for zombie movies with a perfect hero, that could be a good or bad thing.

So the Oscars are happening this Sunday.  And as a diehard movie buff, I did what I always do the week leading up to the big event: I watch 1 of the Best Picture nominees and convince myself that it’s the best movie of all the nominees.  This year it was Moneyball.

Though I thoroughly enjoyed the movie, I was disappointed by 3 main things:

1). Scott Hatteberg’s character was played by the same actor who plays Andy Dwyer on Parks & Recreation so I was extremely disappointed when Scott wasn’t saying things like, “If you rearrange the letters in Peru, you get Europe,” or “I hit my head…or, brain helmet.”  By the way, if you don’t watch this TV show, you’re missing out big time.

2). I kept expecting Jonah Hill’s character, the assistant GM of the A’s, to be drawing dicks all over his spreadsheets and documents.  Watching Super Bad again this past Saturday probably played a major role in this particular expectation.

3). This final one really threw me off the whole time: In the movie The Curious Case of Benjamin Button, Brad Pitt plays a character ranging in age from 30 to 85 (rough estimate).  The actor–combined with make up and visual effects–is able to play a character over a period of 50-60 years.  In Moneyball, Brad Pitt plays Billy Beane, GM of the A’s, at the age of 40 in 2002.  But when the movie does flashbacks to show a younger Billy at ages 18-29, they use a completely different actor.  So in one movie, Brad Pitt can span half a century, but in another movie, they can’t make him play the same character over a 20 year span?  Was this only confusing to me?  Totally bugged me the entire time.  For those of you who watch How I Met Your Mother, this is similar to the weirdness in that show where the main character is an adult, but when they flash forward to him narrating the stories to his kids (presumably 20 years later), it’s Bob Saget’s voice.  At what point in this guy’s adulthood is he going to turn from his current self to Bob Saget?  Why couldn’t the actor who plays the main character in present time also provide the voice for the flash forwards??  Just makes no sense.

And while we’re speaking of the Oscars, I’m begging the Academy not to give the Best Picture to The Artist.  It’s probably a great movie, but you’re setting movies back 75 years by voting for this film.  The Oscars are constantly concerned by lack of viewers, especially younger viewers.  And yet, here we are, days away from seeing a silent movie win the big prize.  Here’s one simple question the voters should ask themselves to decide what is really the Best Picture: “which movie am I likely to watch more than 1 time?”  Or put another way, “which movie will most likely cause me to put the remote control down if I’m channel surfing and stumble upon it playing on HBO?”  Isn’t that the right way to judge the best movie?  Don’t we only watch the best movies multiple times?

For example, last year I saw The King’s Speech in the theaters about 2 weeks before the Oscars.  Good movie for sure, but will I ever stop to watch it if it’s on TV?  Not a chance.  Nominated against The King’s Speech last year was Inception.  Also saw it in the theaters….but also have watched it 15 times over the last year whenever it comes on TV.  That, to me, makes it the better movie.

So there’s my two big opinions on movies leading up to the Oscars: if Brad Pitt can age 50 years in one movie, he can do it in another movie, and the Best Picture Award should be turned into the Most Watchable Movie  Award.