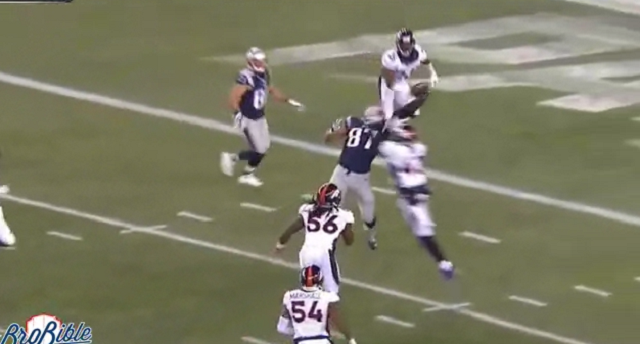 Consider week 9 our payment to the football gods for all those random Sundays when the schedule looks pathetic, but we get the random excitement when Oakland takes San Diego to the wire, or Carolina & Cincinnati exchange haymakers over five quarters, or the Cowboys go into Seattle and stun everyone with a road win.

Make no mistake about it, week 9 was the worst slate of football games we’ve seen in a long time. Think about our expectations versus what actually took place.

Any time someone brings up the possibility that sports leagues fix their games as a NEGATIVE, just point to week 9 of the 2014 NFL season as your counterpoint. Think of all the amazing things the NFL could have done with this past weekend’s games if only the people who run the league were corrupt…

Overall only four of 13 games didn’t end in an absolute blowout. I’m moving on from week 9, burying it deep in the middle of that dung pile.

Let’s spend the rest of our time together checking in on my preseason picks for how the playoffs will unfold (with an assist to guest blogger Neil as I’ll forage through his picks too and see how right or wrong we both were). My loyal readers know I try to be accountable about preseason predictions. Let’s see what we’ve got.

Ross’s Thoughts Upon Seeing That Prediction

Lessons learned from this exercise? Neil and I probably just as good as every other football prognosticator when it comes to predicting in September how a 12-team tournament will play out in January after 32 teams have spent 17 weeks trying to kill each other.

It’s the NFL. It’s unpredictable. It’s chaotic. It’s frustrating as hell sometimes. But I wouldn’t want it any other way.

But can someone from the league office please step up and be a little shady and underhanded for once and simply fix a few games to ensure week 9 of 2014 never ever happens again?