At 10PM on Thursday night I was shutting my laptop to go to bed, but decided to refresh my Twitter feed one more time. That’s when I saw a bunch of tweets about a shooting at MIT and a possible car chase and shootout in Watertown. Even though no one was claiming a link between these incidents and the Marathon bombings at that moment, I just had a feeling that the shit was about to hit the fan.

I turned on CNN and they were interviewing someone involved in the West, Texas, fertilizer plant explosion (a horrible, horrible incident that’s clearly getting no attention right now because of Boston). My girlfriend asked me to change the channel because it was difficult to watch this guy being interviewed count up the number of friends he lost in the fire. I told her I had a feeling CNN was about to break into this coverage with the situation unfolding in Boston.

About 90 seconds later, CNN made me look like smart in front of my girlfriend. As you’ll read throughout my post, this wouldn’t be the last time in the next 12 hours that Twitter would be feeding us information far sooner than the slow-moving TV media.

The next time I looked at the clock it was 12:45AM and I was exhausted. I had gone from “ready for bed” to “I’m riding this out all night til they get these Fuckers.” There were so many conflicting reports flying around (One of the bombers is dead and the other is on the loose! No, they’re both alive, but one is in custody! But there’s a third guy who the cops made get fully naked before they threw him in the back of a cruiser! But he was an innocent bystander!).

I ultimately decided to go to bed, fully assuming that by the time I woke up at 7AM the suspects would be dead or caught.

I woke up at 5:50AM Pacific Time to see the situation wasn’t resolved. So I did what any other semi-employed, too-much-time-on-his-hands American would do…I setup shop in my living room assuming I’d be glued to the couch for the foreseeable future.

Step one was finding a couple knowledgeable people in the Boston area who would be providing constant updates on Twitter and to start following them.

Step two was to turn on CNN or MSNBC, hoping I’d get some updates but mostly for the unintentional comedy they always provide.

Let’s fast forward to 7:45AM Pacific Time and go through all the important moments via the running diary I kept:

7:45: The only positive that these two assholes have given us is the complexity of their first and last names. Rather than learn how to pronounce their names, CNN is going exclusively with “black hat” and white hat.” Works for me.

7:51: CNN just filled about 90 seconds by explaining all the different ways a person in this situation might commit suicide. The possibilities included shooting himself in the head, blowing himself up with explosives, slitting his own wrists and filling up a bath tub and drowning himself. Could you imagine this guy with all these guns and explosives taking the time to fill up a bath tub and then trying to hold himself under water until he’s dead? I’m not convinced, CNN. Maybe we should dive deeper into the suicide possibilities.

7:59: I’m already considering my food delivery options for the day. It just doesn’t seem like this is ending soon and I’m not leaving the couch til it does.

8:09: Getting bored by the lack of action and suddenly a friend sends me a link to a website where I can listen to a Boston police scanner live….O M G, I’m gonna be peeing into a bucket near my couch for the next few hours.

8:13: First legit thing I hear on scanner: “We’ve got a EOD robot that’s gonna try to take his jacket off”. These poor robots. They’re the real first responders. When this is all over, I wanna see a robot throwing out the first pitch at a Red Sox game in honor of all the good robots we lost in this battle.

8:23: I just sent menacing texts to Julie about how I now have access to a scanner and it must suck for her to be at work. She really didn’t want to leave the couch this morning. Can you blame her? She wastes all her time watching “Real Housewives” and “Say Yes To The Dress,” and finally a true reality show comes on and she can’t stick around to watch.

8:35: The scanner was just interrupted so the website I’m listening to it on can throw an Old Spice ad at me. Really?

8:37: You probably already guessed this, but yes, I took my computer into the bathroom for my morning bomb-dropping. I refuse to miss a second of this action.

8:40: I already have to charge my phone today even though I woke up with it fully charged. That’s how hard I’m working right now.

8:44: I’m kinda of owning Facebook and Twitter right now. Throwing out “Game of Thrones” jokes and jokes about the TV media’s turtle-like pace. My synapses are really firing on all cylinders.

8:50: Above all else, this week will go down as the official end of me ever going to CNN.com for breaking news. Thank you, Twitter.

8:54: I’ve always wondered about those weird people who own physical police scanners and just constantly have them on. Those weirdos with the scanner chirping away while they eat dinner and smoke their cigarettes. Now I understand. You basically get to be part of the team, hear all the locations they’re searching, what type of teams they’re bringing in (SWAT, EOD, detectives, etc), and you can even grab some Cops’ cell phone numbers if that’s the kind of thing you’re into.

8:56: On a semi-serious note, I do worry about what one or two people are able to do to an entire city and the rest of us that are glued to the TV and internet. They’ve brought a large Metropolis area to its knees and they’ve become the focus of an entire country. Two guys. That’s worrisome.

8:59: I should put on pants now while there’s a lull in the action. Never know if I’ll have a chance the rest of the day or not.

9:03: Huge, HUGE day for robots. Every third word on the scanner right now is “robot.” Whatever the robots’ salaries are, double it.

9:04: Would hate to be an attention-seeking criminal today. Just imagine a guy who had this elaborate bank robbery plan that he was supposed to pull off today. Poor guy won’t be getting any coverage. Anyone looking for their 15 minutes of fame, I’d recommend you choose a different week.

9:22: The twitter flow is slowing. I think all of the Boston people who I was following since last night finally decided to get some sleep. Bummer.

9:32: Press conference from Watertown coming up. I’m concerned that all they’re going to do is recap everything I already learned on Twitter over the last couple hours.

9:39: After one of the most pointless press conferences ever (continue staying in your homes, continue praying for our police officers), I decided if I do nothing more today, I’m going to get my exercise in. I’m off for a five-mile jog (it’s what the marathoners would have wanted me to do).

10:51: Just returned from my run to find out….ABSOLUTELY NOTHING HAS CHANGED IN THE LAST 70 MINUTES!

10:55: The bombers’ Aunt is on TV now live from Toronto. To paraphrase: “They are smart guys. I brought them here in 2001. Yes, they liked their lives here. If they didn’t, they’d leave. I’m a lawyer with an abrasive edge.” Let’s stick with the semi-crazy Uncle as the family’s official spokesperson, please.

11:08: Not that the Red Sox game is a top priority right now, but I couldn’t help but think of them. Remember how in my blog a couple days ago I mentioned that baseball players are creatures of habit? How do you think their typical routines are playing out today? Don’t come to the ballpark, stay in your homes. The game’s probably cancelled. No, we haven’t cancelled the game yet. Be ready. But you can’t come to the park to workout, take batting practice or anything else. If they play tonight’s game, I have no expectations for how it’s going to go.

11:11: CNN correspondent informs us things are slowing down at the Watertown scene. Jesus, they’re even behind the rest of us when it comes to reporting that there’s nothing to report.

11:20: On MSNBC, they’re still referring to one of the brothers as “dark hat.” I guess seven hours isn’t enough time to master the pronunciation of someone’s name. Which leads me to ask, what would they be calling these two guys if neither had been wearing a hat on Marathon Monday? Large Nose and Regular Nose?

11:58: You know things have really slowed to a crawl when the media’s now trying to make a connection between the younger brother’s actions and the fact that he became a U.S. citizen on 9/11/2012.

11:59: Here’s hoping the Bruins don’t have any games that go to a shootout the rest of the year. I don’t think Boston needs to see any more headlines that read “Boston Involved In Another Shootout”.

12:00PM: Out of all the brilliant tweets and Facebook posts I put out there this morning, I cannot believe nobody commented on or “liked” my “Game of Thrones” reference. I thought that was one of the finest moments in my comedic history. Just nailed it. Guess I don’t have a good handle on what my followers find funny.

12:03: Glad to see CNN isn’t even attempting to spell this fucker’s name right at this point: 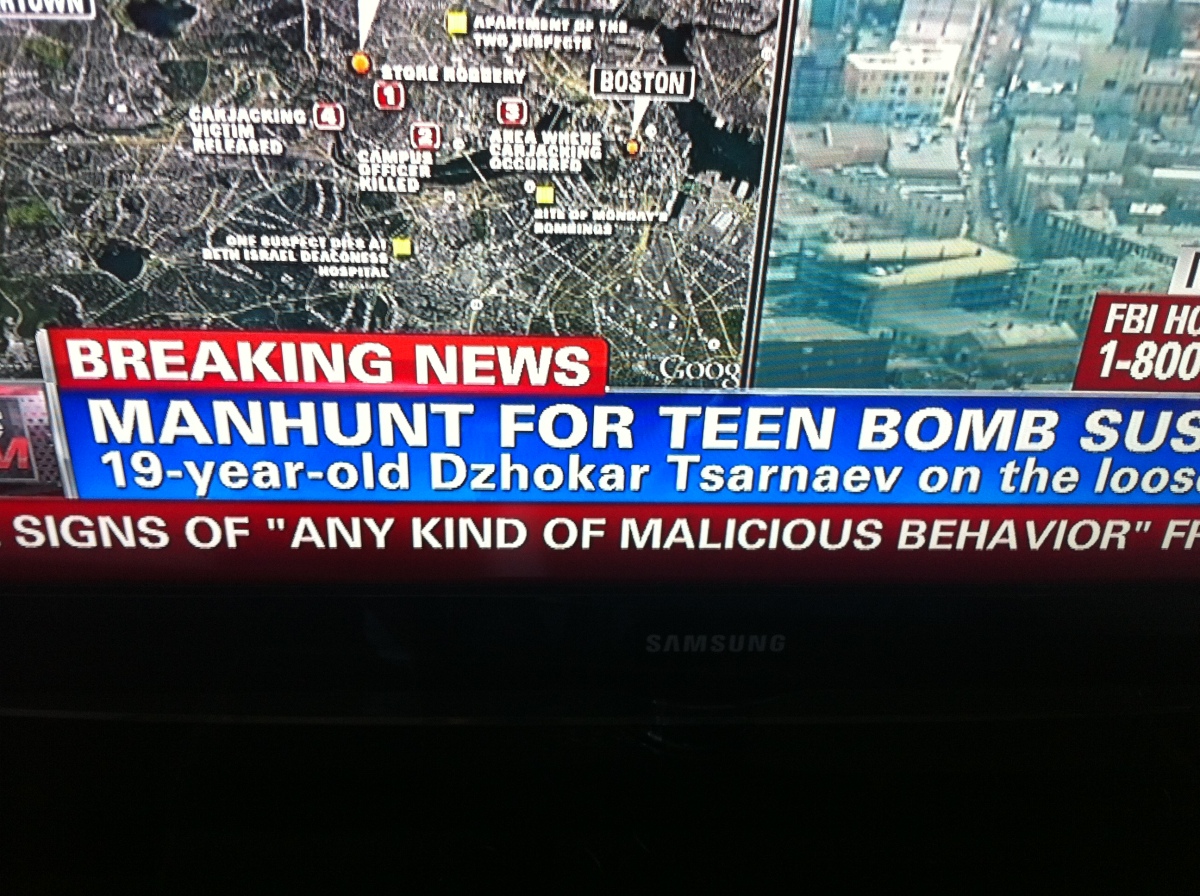 If you’re gonna take letters out of his first name, just go back to “white hat”.

12:13: “Someone framed them. I don’t know who did it, but someone did.” An exact quote from the father. Umm…that theory probably went out the window the moment these guys started tossing explosives out of a car at the Boston Police during a chase.

12:22: If this area in Watertown that they’ve put a perimeter around ends up not producing Joe (that’s what I’m calling the living bomber at this point…CNN already started slowly Americanizing his name by taking out letters, so why can’t I just go with Joe?), things are going to get a lot crazier and scarier in all of New England.

12:25: Here’s why I would be a terrible member of the judicial system: My first thought on how they should punish this guy if they catch him alive was that he should be locked in a jail cell with his brother’s rotting body, and if he wants to eat and stay alive, here’s a knife, there’s your bro’s body, go to town, Fucker.

12:27: I’m going on hour seven of nonstop watching CNN, listening to police scanners, refreshing Twitter every two seconds, basically freaking out. And I look over to check on my dog to make sure she’s handling all this news OK, and here she is:

Just doing her “play dead” sleeping on the couch, nipples and vag up, not a care in the world. I’m so jealous of her right now.

I’m posting this at 1:15PM Pacific Time and I’m still tracking every move out of Boston, but in case this goes on for another 36 hours, I wanted to post the first part of my day. There’s a very good chance I come back with Part Two later tonight.

I know I made a lot of jokes that make light of the situation, but that doesn’t mean I’m not taking the situation seriously or hoping they catch this guy ASAP. And I’m so thankful this isn’t happening in LA because the Grilled Cheese Competition I’m participating in tomorrow would probably be cancelled.