I’m not sure if there’s a simple name for this behavior so I’ll just describe it instead: Whenever I receive positive feedback on something I’ve accomplished—no matter how insignificant—my immediate instinct is to slack off and stop doing that thing I just got complimented on. Maybe you’d call it over-contentness, I dunno.

A few examples to make sure you know exactly what I’m talking about:

You can’t really call this characteristic I’m describing “procrastination.” It’s not like I’m delaying a task and taking on things of less priority. I’m literally doing nothing but soaking in self-satisfaction in these situations.

So why am I wired like this? Some people are wired differently, right? Some people make that big sale and immediately pick up the phone to make more of them. I’m assuming the top writers in Hollywood sell a script and immediately get to work on the next one, probably the same night they make the sale. First time I make a big sale with my writing, I’m vacationing until the money’s all gone.

For those of you reading this who are psychologists, behavioral specialists or motivational coaches, can you give me some feedback on how to break a 30-year-old slacker of this behavior? (And don’t you dare say you enjoyed the blog in your feedback!)

Oh, and for those of you who saw me at the wedding in Boston last weekend and complimented me on losing some weight, thank you. You know what I was doing at 2AM after taking in all of your generous comments? I was destroying a 30-count of buffalo wings alone in a hotel room. I washed the wings down with a tall glass of blue cheese. So thanks again. All you did was guarantee that the next time I see you, I will be 100lbs heavier than the fattest I’ve ever been.

Have you ever seen someone so ready to rock their UCLA Extension writing class? Me neither. So what if the class was from 7-10pm…nothing was going to stop me from bringing my brown bagged lunch on day one (If you’re curious, the bag contained m&m’s, grapes and a lollipop. If only I would have stopped at Starbuck’s on my way to class to grab a hot chocolate, then my classmates would have really known they were dealing with a mature adult).

Since it was my first time in a classroom in more than seven years, I decided to actually pay attention and observe my surroundings. Here’s what I learned in week one:

-It was a strange sensation to sit in a three-hour class and not have my mind wandering to every topic besides what was being taught. Out of 32 undergrad classes at BU, I can’t recall more than four or five where I was actually paying attention to the content being discussed. That gives me hope that I’m finally enrolled in the right class.

-When I was last in school, Smartphones didn’t exist. Waiting for class to begin back in the old days of 2005, your only option for entertainment was to actually talk to people. Scary stuff. I feel bad for teachers mostly because it’s gotta be nearly impossible to hold 20 students’ attention for even an hour when every one of them has their iphone right next to their notebooks. Or it could be even worse, like the girl next to me who was using her laptop to “take notes,” but really was just doing silent video conferencing with her husband the whole time.

-But I did discover one huge benefit to having an iphone in this setting. Halfway through class, the teacher asked us to go around the room and introduce ourselves, including where we were from, what writing experience we have, what our favorite TV shows are, and why we decided to take the class. Of course you all know that in a group of 20, there’s going to be a couple people who decide to hijack the conversation, stretching their time to speak from two minutes to 10 minutes, deciding instead of answering the teacher’s questions to focus on their whole life story (if you don’t think you’ve been in a group of people where someone is doing this—whether it be school or work—then I’m happy to tell you that you are that person, and you should shut the fuck up sometimes). Anyway, to show these people that I was just about done with their story, I combined a shameless “whip out my iphone and pretend to be playing games” move with a loud throat clear, ensuring even the dumbest person understood the social cue.

-After hearing all these boring stories from my classmates, I was a little shocked to learn I was the only one who purposely quit his job, became unemployed and expected to make it as a writer before money runs out. Most people in the class think they’re going to have to work hard for years just to get noticed in the entertainment industry. Boy, are they clueless…

-The three-hour night class felt a little strange in that I was sober and it was a real class. The only night class I ever had at BU was called “Sports Management” where the most difficult task over an entire semester was creating a practice schedule for the fictitious sports team I was pretending to manage. And we usually went to the BU Pub and pounded beers before class. Now I show up sober with grapes and a canteen of water. So sad.

-The teacher totally validated himself in week one by showing us a New Girl episode at the end of class and then promptly tearing it to pieces. That’s how you get on my good side, which I’m sure was his goal all along.

-I hate to predict failure for any of my classmates, but I wonder if the woman who doesn’t own a TV, hasn’t watched a TV show in over 10 years, and claims not to have any time to practice writing is going to do well in a Television Writing course?

-If karma has a sense of humor, my teacher will pair me up with that woman for some kind of important project.

-Oh, and just for a comparison so everyone knows I haven’t changed a bit since the last picture of me going to school was taken, here you go: 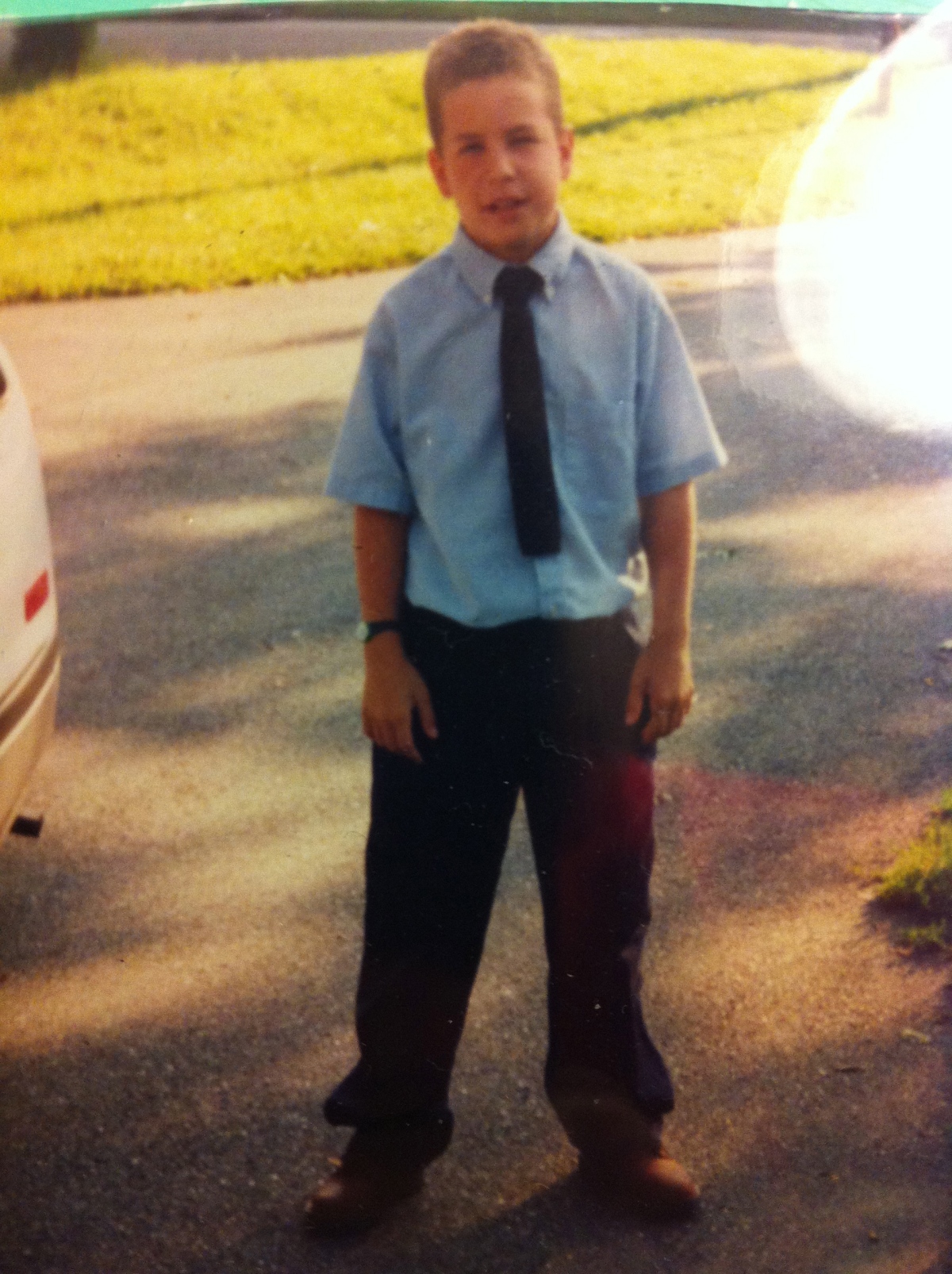 God. Damn. I want that square knit tie back.