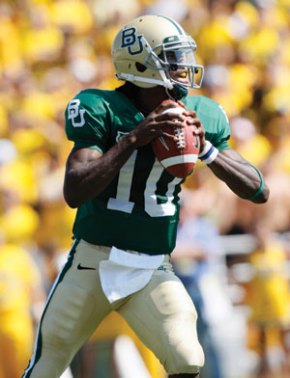 ESPN.COM – In a predraft blockbuster trade, the St. Louis Rams have agreed in principle to send the second overall pick in this year’s draft to the Washington Redskins for three first-round draft picks and a second-round pick.

So the Redskins trade 3 first round picks (this year’s 6th pick, and 2013 and 2014 picks which will almost definitely be top 10’s as well) all to move up 4 spots so they can take Robert Griffin.  Does this seem crazy to anyone else? I mean, listen, I guess if Griffin works out and becomes a franchise type QB, it’s worth it.  But that’s a big gamble.  Most first round QB’s turn out to be busts… Jamarcus Russell, Ryan Leaf, David Carr, Tim Couch, Alex Smith (until this year), and of course Heath Shuler… just to name a few.  Obviously a no brainer for the Rams.  They’re not drafting a QB anyway with Bradford there, so now they can still fill a hole this year with a solid 6th and they are set up well for the future.

I think the bigger story here is how depressed Robert Griffin must be.  What a punch in the dick for this guy. Is there a worse place you could land in the NFL than Washington?  I don’t think so.  Crappy weather, ugly uniforms, idiot owner, perennial joke team.  Dude was riding high after winning the Heisman, looking forward to a promising future in the NFL, and then bam!  Instant career ruiner.  Over before it’s even begun.

One thought on “Skins trade up in the draft, Griffin on suicide watch”