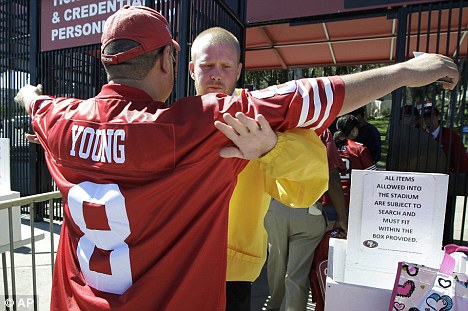 The busy sports season is upon us. True, baseball’s nearly over, but we’re only midway through the NFL and college football seasons, the hockey season is a few weeks old, and basketball—both college and NBA—is about to start. Even less popular sports like soccer, field hockey and wrestling are popping up on the fall calendar.

Chances are if you’re a sports fan you might like to attend one of these athletic events at some point. And if you’re a poor college student or even just a financially conscious adult, maybe you don’t look forward to forking over 20% of your net worth just to enjoy a few libations at the game.

Well I’ve made a career out of sneaking alcohol into sporting events for the past 14 years. I do it to save money, avoid long lines and to very gently stick it to the man. A quick web search shows there are now many products out there to help people like us get alcohol past security. One search result shows products like fake binoculars, cameras and seat cushions, all with secret containers to store alcohol. But I’m more of a traditionalist when it comes to this stuff. No need to purchase special products in my opinion.

Here are the 9 best ways to sneak alcohol into a stadium, arena, gymnasium, forum, center, or any other random name we give to sports venues.

Let’s start with the obvious and simple methods and progress to the more complicated ones:

1. Hide a bottle of liquor at the bottom of your girlfriend’s gigantic purse

Listen, if there’s one thing I’ve learned by having girlfriends throughout my adolescent and adult life, it’s that when Mary Poppins pulled a lamp out of her handbag, it was not as jaw-dropping of a moment as it seemed when I was a little kid. Women can fit an ungodly amount of shit in their purses. And while stadium personnel typically give a cursory look into those bags, they never dig very deep. Put a fifth or a flask at the bottom of the purse and cover it with the typical female stuff. Or better yet, add an extraordinary number of tampons to the purse and make sure she goes through a security line with a male security guard. She could probably have a rifle sticking up out of the tampon pile and the guy would still wave her right through.

2. Conceal a bottle or flask under the sweatshirt you’re holding in your hand

Sometimes security actually does a reasonable job of patting you down, but they almost never think twice about the harmless sweatshirt you’re bringing in. Hold the liquor or beer of your choice in your hand, drape your sweatshirt over that hand and breeze through security. It seems too obvious and simple, but this might be the strategy I employ most often.

3. Stick a flask in the waistband of your pants

Sure, security could touch you near your no-no spot, but then you won’t have to worry about paying for beer at that stadium ever again because the subsequent lawsuit will make you the owner of that stadium. Stick a flask between your pants and your underwear, right behind the zipper. They don’t touch this area. A word of caution: Don’t place the flask there when you’ve still got a one-mile walk from the parking lot to the stadium. It will start to slip down and possibly fall out the bottom of your pant leg at the exact moment you’re sneaking through security. But also don’t delay in placing the flask so long that security very clearly sees what you’re doing.

4. Beg your girlfriend to hide the flask in her bra

A-cups probably won’t cut it for this particular method, but then again, when do they cut it? The only other reason a woman can’t pull off the hidden-flask-in-the-bra trick is if she’s wearing a very low cut top. But if that’s the case, she can probably just distract the security personnel while you wheel a keg into the stadium.

No, I’m not talking about your girlfriend’s nips. I’m talking about those ant-sized bottles of liquor. Nips are great because they’re so small. You can spread them out. Put a bunch of them horizontally along your waistband as if it were a nip belt. Put a few in your extra wide shoes. Put a couple in your back pockets. I don’t remember any security guards ever cupping my butt cheeks. But please don’t put nips between your butt cheeks underneath all your clothes and then clench your butt together to hold them. This is just alcohol at a sporting event we’re talking about. You’re not trying to sneak contraband to your Uncle in jail. By the way, if you are poor, it’s always best to hold onto empty nip bottles and then refill them from a larger bottle of alcohol. Much more economical.

6. Sneak alcohol in under your hat

Is this a real method? I’ve never tried it before, but I know they never make you take your hat off when they’re frisking you at the entrance. If you come from a culture where you had to balance jugs of water or other kitchen items on your head, this should be no problem. Otherwise, I don’t know, maybe tape something to your head so it doesn’t fall out? Maybe tape nips to the inside of the hat? I just feel like we all wear hats into stadiums and never utilize them enough unless we’re at a hockey game and there’s a hat trick.

7. Smuggle in an entire six pack of beer by wearing soccer socks under your jeans

I stumbled upon this one a few years ago, and it’s now my favorite move when I’m choosing beer over liquor for that day’s festivities. If you wear those long soccer socks underneath pants and have them pulled all the way up, you can seriously fit three beers in each sock. Position the beers behind your calves and as long as you’re not wearing skinny jeans, nobody will be able to tell you’ve got some stuff in there. This is another method where you want to wait as long as possible to put the beers in the right position. If you walk a long ways with six beers in your socks, the socks start to slide down and all of the sudden it looks like you’ve got the biggest cankles known to man.

8. Tape a Camelbak-like bladder to your inner thigh

The previous seven methods work great for beer and liquor, but what about wine? Sometimes we just want a crisp Sauvignon Blanc with our football watching. I haven’t actually done this, but I assume you can fill a bladder that’s meant to hold water and attach it to your inner thigh (the only area guaranteed not to be molested by the security person). Bonus: If it has the long hose attached, you can unzip your pants, pull the hose through the hole and suck away!

9. Bury a keg in the ground before the event takes place

All of the above methods apply to outdoor music festivals too. But this is the only one that’s exclusive to such an event. This method is the brainchild of me and a few friends when I was living in San Francisco. Every year before Outside Lands (a three-day music festival in Golden Gate Park) we joked about going to the area of the park where the music would be happening and burying a keg in the ground. It would need to be several days ahead of time because they start setting up for the event early in the week. Then when you enter the festival, you simply dig up the keg and start pouring beers into solo cups. Of course, I say we “joked” about doing this because it’s absolutely ridiculous on all fronts. And wouldn’t it be the unluckiest thing if you pulled off burying it and all the other logistics just to find out they built the stage right on top of your special spot? If anyone ever tries this and gets away with it, I will bow down to you for the rest of my life.

Any other foolproof methods that I missed? I know this blog reaches the perfect demographic for stadium-going cheapskates. There must be some ingenious ideas floating around out there. I’m all ears…and nips.