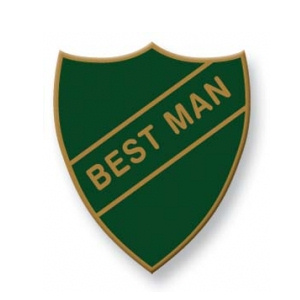 Out of the many things to look forward to when planning a wedding, it seems like picking out your best man and groomsmen might be at the top of the list. Who doesn’t relish the opportunity to let a bunch of people know that while they’re really good friends, they aren’t quite as good of a friend to you as this one particular guy is? It’s an easy way to let people know where they fall on your friendship spectrum. And yet, that enjoyment was ripped away from me six years ago when my oldest brother decided to make his two brothers co-best men in his wedding. That pretty much locked in myself and the middle brother to doing the same co-best men thing when we eventually get married. Apparently it’s now a family tradition or something.

While I don’t really get an opportunity to select the identity of my best men at this point, I can still have some fun with these two guys who repeatedly tortured me for the past 30 years. Remember, only one person gets to stand closest to me on my big day. And that’s a lot of responsibility for that person because he’s a heartbeat away from being the groom. It’s a very important decision….which brother gets to marry my fiancee if I drop dead at some point during the seven-minute wedding ceremony.

So with that importance in mind let’s break it down with an old school Pro/Con list (note that names have been removed so as not to incriminate these guys for all of their past misdeeds, some of which were legitimately criminal).

Tough decision, right? Many of you are probably even wondering, “Why pick either of them? They both sound like assholes.”

I’m tempted to give brother #2 the nod due to the world of embarrassment he could unleash at any time, but I’m picking brother #1 for two reasons. First, because that fire he put out really did save my life. And second, because his swooping skills from that New Year’s story (not an isolated incident, by the way) make me think the wedding wouldn’t skip a beat if I dropped dead. Hell, he might even swoop while I’m saying my vows. I kind of like this wildcard being the second most important person at the wedding (besides me, of course).