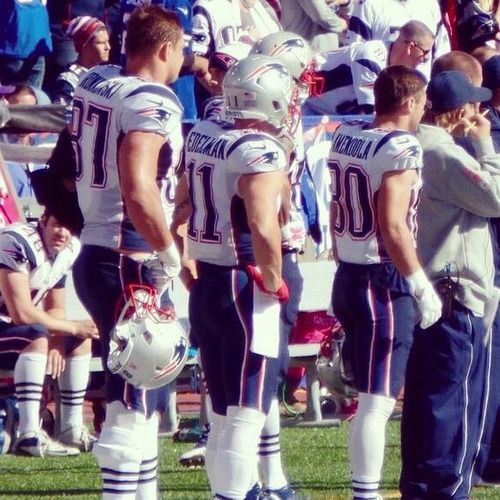 “But then on Sunday morning I forgot to put on my lucky underwear and things went downhill quickly.”

It started out as such an incredible four-day weekend.

I began Thursday with a Turkey Trot in Burbank that was both fun and short. Thanksgiving dinner was incredible. The food that my wife cooked was out of this world, and I wasn’t asked to lift a finger to help or to tear my eyes away from the nine hours of football on TV. My night ended in the right kind of coma: a food and alcohol one.

Friday’s mandatory Christmas tree shopping, a task that I generally hate because it happens in our family far too soon after Thanksgiving, even went well because the place we went to had false advertising on their website. Instead of spending hours picking out the perfect tree to cut down, they only had pre-cut trees which short-circuited my wife’s enthusiasm so we just grabbed the first one available and headed home. Ten total minutes at the Christmas tree lot. And then, to my amazement, decorating the tree and watching crappy holiday movies in the afternoon gave way to my wife wanting to watch the next Star Wars episode on our list (I’m currently forcing her to watch all six episodes in preparation of the new Star Wars coming out on December 17th that I’m making her attend with me). And, HOLY SHIT, when we got done with one episode on Friday night, she asked if we could jump right into the next one!

Was it my birthday and no one remembered to tell me?

Saturday featured me putting down roughly 13lbs of leftover Thanksgiving food, and then it was off to the Kings-Blackhawks game at Staples Center. Any hockey game is a good time, but this turned into the best regular season game I’ve ever attended. A huge Kings comeback in the 3rd period that led to an epic overtime where they finished off the defending champs. A Western Conference Finals atmosphere in late November.

But then on Sunday morning I forgot to put on my lucky underwear and things went downhill quickly. I could try to tell you that my third consecutive day of living purely off leftovers made me ill, but even though it kind of did, I don’t regret that part of my day for a minute. The ugliness of yesterday revolved entirely around football.

The precursor was all about making money on football. In my Survivor Pool there were only three of us remaining heading into week 12. The guy who organizes this pool has “special weeks” embedded to help get the pool over with before the season ends. So this particular week we were forced to each choose two teams to win instead of the standard one. I chose the Chiefs and the Giants (options really are limited at this point), and as you know, Eli Manning screwed me over for the third time in my life. But I was about to catch a break in the late afternoon games. My two opponents both had the Cardinals as one of their picks. After Arizona scored a late touchdown and missed the extra point, the 49ers were in position to march down the field and win by one. That would have led to all three of us in the Survivor Pool going 1-1 on our picks, meaning I’d still be alive in week 13. But with the Blaine Gabbert offense of the 2015 49ers, there really is no “marching.” It’s more of a plodding & hoping type of offense. And so they lost and I did too.

Around the time that my Survivor hopes were swirling around the drain, I looked up and noticed that I was finishing off another below average week of picking against the spread. Well, the day really sucked, but I still had the perfect Patriots coming up on Sunday Night Football. All could be well with this weekend still.

I never expected Patriots-Broncos to be the main event to my Sunday Horror Show.

I think it would be redundant to the readers to rehash in detail all the things that went wrong on Sunday night (not to mention it could be viewed as emotional self-mutilation on my part to write it all down). So let’s just go with this: In a single 60-minute span, the Patriots’ awesome defense tanked against a very bad offense, an avalanche of bad calls by the referees all went against the road team, every bounce of the football (three fumbles all recovered by Denver) went the wrong way, and New England’s most important offensive weapon went down with what looked to be a gruesome knee injury.

I think Bill Belichick said it best from the sidelines:

After the devastation ended, I walked around like a zombie for a few minutes, trying to collect myself and make sense of what just happened. Then I patrolled Twitter for way too long, trying to see what the general pulse of the people was after a game like that. As you can imagine, there was a variety of storylines and reactions. The general sense I got was Patriots fans were crying foul over the referees’ atrocious calls and the low hit on Gronk’s knee while the rest of the country was celebrating a Patriots loss and the bad karma they had earned because of cheating (aka “being too good”).

My take is that both sides are right and both sides are wrong. Patriots fans have every right to feel like they got a little hosed last night, but at the same time, we have to recognize that every team has gotten screwed by injuries and bad officiating in the past. And we also should never expect the rest of America to feel bad for our team, which has been so good and a little lucky for so long.

And while Patriots haters have every right to say, “I don’t feel bad that they have injuries and got a little screwed by the refs,” they should at least recognize that last night’s game–especially the 2nd half–was not called evenly. Trust me, no one will mistake you for being a Patriots apologist if you say the Pats got screwed, as long as the next words out of your mouth are, “But fuck the Cheatriots and their dickhead coach Belicheat.” (I think that’s how it goes, right?)

But while Sunday really, REALLY sucked, here’s my overall take:

If the 2015 season ends with football fans screaming 18-1, it will be the greatest single moment of the Patriot Dynasty.

Now if you’ll excuse me, I’m running late to my 10am appointment with a turkey and his friends: stuffing, potatoes and gravy.