I would never have thought the answer to that question could be Yes until about a week ago.  Up until then I figured she thought I was reasonably handy—like she knows I know the difference between a phillips head screwdriver and a flat head screwdriver, but probably assumes (correctly) that I can’t change the oil in a car by myself.  Have I ever changed a flat tire?  Hell no.  But have I successfully started a camp fire?  Of course (lighter fluid, starter log and match light charcoal).

But then a week ago I rented a moving truck, and on Wednesday night we packed all of her and her roommate’s things into the truck.  On Thursday morning, I helped her roommate drop off all her stuff at a storage unit, leaving only Julie’s items in the truck.  After I drove home , I looked in the back and saw that boxes had flown around all over the place.  Makes sense since the roommate’s items were gone and there was nothing holding Julie’s items in place anymore.  When I called her and told her I was busy rearranging the truck because this happened, she told me to leave it alone until she got home to fix it.  But she didn’t say it in a “Gee, Ross, I know you’ve got a lot to do today” kind of way.  She said it in a “You’re probably gonna fuck it up even worse so just stop” kind of way.  I admit I’m not the world’s greatest packer, but come on…

And then today, I’m on the phone with her (she’s in San Francisco, I’m at our new apartment in LA), and she asks if I tried to setup this tiny metal file cabinet thing we bought from Ikea.  I told her I hadn’t, and she literally said, “Oh good.  I don’t want you to try to do it and screw it up so just leave it for when I get back.”

Of course I was flabbergasted, and she quickly backpedaled saying, “I just figured you’ve never setup Ikea furniture so you might not know how to do it correctly.”

First of all, I’ve setup plenty of Ikea furniture, but that’s besides the point.  Anyone who has ever been to Ikea or seen a piece of their furniture knows it’s made to be 100% idiot proof.  The furniture and their corresponding directions were made so even my unborn nephew could easily build a dresser from the womb.  Like if you just empty the Ikea box onto the ground, there’s a 66% chance the different pieces will put themselves together for you.

And just so everyone knows how big of an idiot my girlfriend really thinks I am, here’s a picture of what she didn’t want me trying to setup: 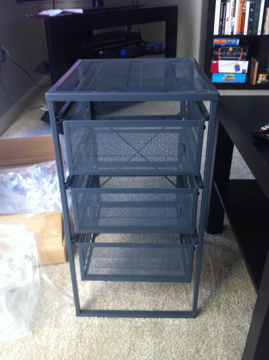 Eight total pieces, two different types of screws.  Lucky for me, she just inadvertently gave me permission not to lift a finger around the house for the next 16 days while she’s gone.

Many people think of me as a sports jinx.  It’s basically an annual tradition for me to tell my friends which new Red Sox player’s jersey I bought so they can groan about how that player is about to either be traded or severely injured.

But facts are facts.  All it took for the Boston sports teams to go on a never-seen-before championship run was me moving to Boston in September of 2001.  Only five months later, the Patriots kicked off the Decade of Dominance with their first Super Bowl.  Over those four years at Boston University, the Patriots won three Super Bowls, the Red Sox won their first World Series in 86 years, and the Terriers took home the Beanpot Championship three times.

Coincidence?  Maybe.  But then I move out to San Francisco and only five short years later, the Giants are celebrating their first World Series Championship in like 50 years.

And if we wanna go even farther back in my lifetime, didn’t St. Bernard’s High School make magical championship runs in Football (division six, but still) and Basketball once I enrolled?

So when the LA Kings win their first Stanley Cup Championship in the team’s 45-year history tonight, just remember that I moved to LA six days ago.  I’m the exact opposite of a sports jinx.

I’m open to relocating to any city as a good luck charm as long as all my living expenses are covered by that city’s taxpayers.  Who wants me?

I’ve been living in LA for six days, and the reason for the move was to jumpstart my writing career.  And maybe in those six days I haven’t written a single thing, but I’ve never been so sure that my screenwriting career is secure.

There are three main reasons for this confidence.  Here are those reasons in the form of YouTube clips (I swear these are all real, meaning someone wrote the script, someone got hundreds of actors to willingly audition for these roles, and someone else spent millions of dollars producing and marketing these movies):