I know many of my readers aren’t in the LA area so they probably didn’t get to see the local news after the Kings won the Stanley Cup last night.  Well even though it’s been more than seven years since I’ve gone out to riot after a sports championship, I couldn’t help myself and decided to head down to the Staples Center last night.  Here’s a picture of me just killing it in the background of this newscast.  Obviously I’m the guy with the Red Sox hat on. 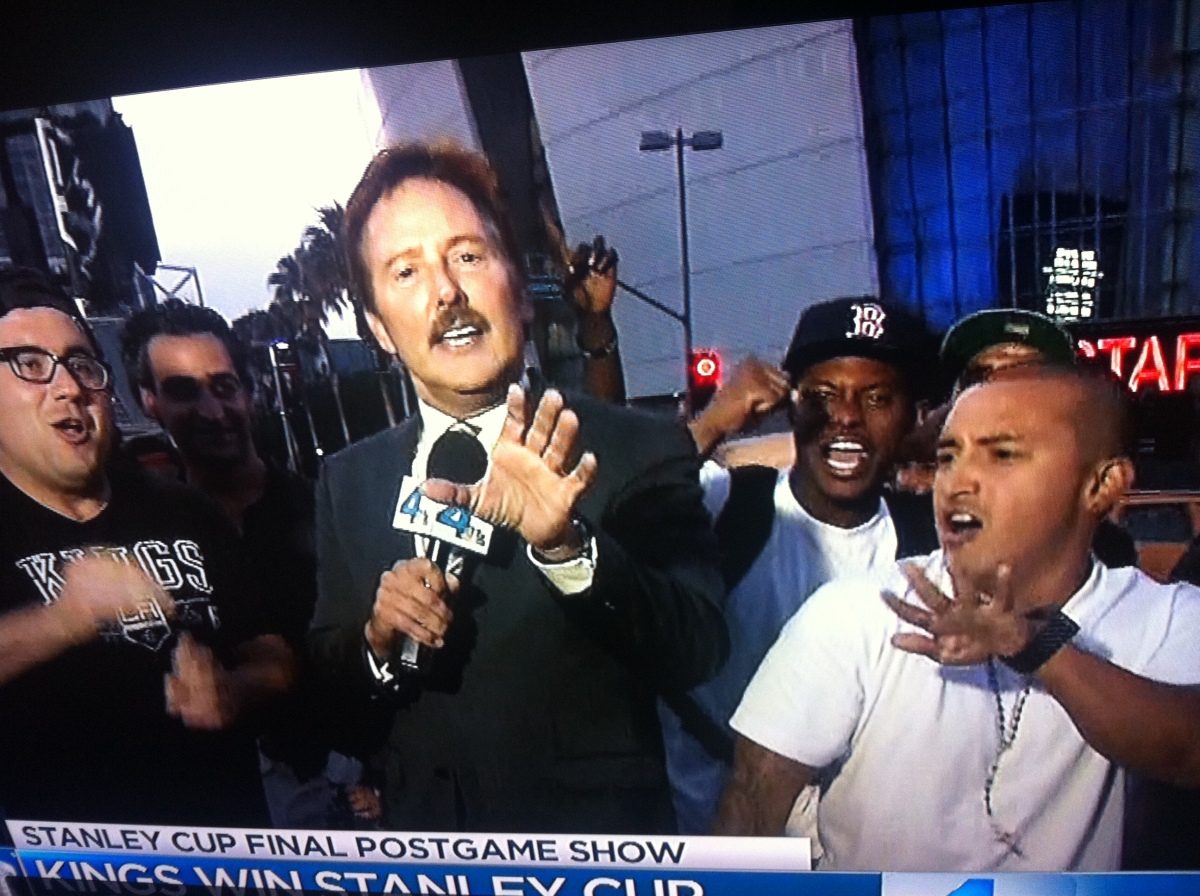 So I decided to try out black face for the first time in my life too.  Got a problem with that?

Editor’s Note: Sadly, we did have more than three views of Neil’s first soccer post, and I even got a “like” on Facebook when I linked to it last week, so I’ve given in and I’m allowing Neil to do a recap after each round of the Euro.  Don’t blame the guy if his post is boring…he’s covering soccer after all.  How exciting can you make the sports equivalent of watching grass grow sound?  Maybe if he does this first assignment well, I’ll promote him to my main WNBA blogger next.

According to Rmurdera, my article last week on why everyone should watch the Euro was the most read soccer post ever on this blog, so he asked me if I would do a quick recap now that everyone has played one game and what to look for as each team plays their second game in the group stage.

Group A
What happened: Everything went pretty much according to plan to start this group. Russia was a clear favorite in the group and they looked very good in dominating the Czech Republic. I laughed pretty hard when Rmurdera sent me a text five minutes into the Russia/Czech game saying he put a bet on Czech to win. Russia was up 3-0 about 15 minutes into the match. If only he read my post. Poland and Greece played to a very eventful draw that included horrible officiating, the home team dominating the first half, Greece scoring the equalizer down a man, and the backup Polish goalkeeper coming off the bench with no warm-ups and saving a penalty kick, which many of us may never get to see again in our lifetime.

What’s to come: Assuming Russia beats Poland in their match (not a guarantee because Poland is playing at home, but Russia looked really good in their first match), the Greece v Czech Republic match will tell us a lot about the second team to advance from this group. If either of them can get a win, that team will be in very good shape to make it out of the group stage. A draw is not the worst result for the Czech Republic, but would put serious pressure on Greece who will have to play Russia in their final group match on Saturday.

Group B
What happened: We were 16 minutes away from having giant upheaval in this group. Instead we got only above average upheaval. Denmark scored an early goal against one of the tournament favorites, Holland. Even though the Danes were exhausted from chasing Holland around, and Holland played a better game, Denmark hung on for the huge 1-0 upset. Portugal looked as if they were going to be able to hold on and force a draw with another tournament favorite, Germany, until the Germans scored a late goal and hung on for the win.

What’s to come: Again, The Netherlands were one of the three favorites (along with Germany and Spain) to potentially win this tournament. Depending on how things go on Wednesday they could be eliminated. On the other hand, it is not impossible to imagine both Portugal and The Netherlands wining on Wednesday and making for a very exciting final group day for this group on Sunday. Either way, both of the matches for this group should be great on Wednesday.

Group C
What happened: Spain and Italy, the two favorites to come out of this group at the beginning of the tournament, played to a well deserved 1-1 draw. Italy played a little better in the match but Spain is probably the better team, so the draw seemed pretty fair. Croatia more or less dominated Ireland and is now the leader of this group after the first set of matches.

What’s to come: With Spain only getting a draw and being outplayed by Italy, the most likely scenario is that they come out a little more motivated against Ireland and win easily. That makes the Croatia v Italy match on Thursday the important one for this group. Whereas Italy will probably be OK with a draw since they have Ireland in their last group match, Croatia will be more pressed to get a win as they have Spain in the last group match. A loss for either team will probably mean virtual elimination, so it will be interesting to see if the game is tied in the last thirty minutes or so whether either team risks pushing forward to try to win or would rather settle for a draw.

Group D
What happened: England and France played a fairly lackluster game (especially the English, they were very passive most of the game) and ended up with a 1-1 draw. Co-host Ukraine was able to to outlast Sweden 2-1 (all three goals came in an exciting 10-minute span) and will go into the second set of games as the group leader.

What’s to come: Much like group C, you had the two favorites to advance out of the group playing each other to a draw in game one. France will play against a home team in Ukraine on Friday, and would like a win but can probably live with a draw. England will need to be a little more aggressive and try to get a win against what will be a desperate Swedish team. England needs to avoid a situation where they would need to win what amounts to a road game against Ukraine on the last day of group matches in order to make it to the next round.