After three months of living in LA, you’d probably expect me to have lots of stories from all these new things we’re experiencing. I don’t. Turns out life isn’t that exciting when you’re an unemployed writer trying to get by on the money from your childhood savings bonds, and it’s even less exciting when you have a puppy that demands your attention 18 hours a day.

Rather than end this post right here, I’ve put together a list of frequently asked questions that people might have asked me about my first quarter in LA.

Question: You mentioned being unemployed. What’s the deal with that? Any jobs on the horizon?

Answer: I’ve learned that it’s tough to get a job when you haven’t started looking for one, and unfortunately, Julie isn’t making quite enough money yet for me to be a stay-at-home boyfriend. The blog is starting to pull in some revenue…I made $0.99 last month off my advertisements, but Word Press doesn’t allow me to claim any funds until I’ve made $100 or more. So in just eight short years, I should be able to cash out that first $100 from the blog. In all honesty, I’ve been waiting for someone to contact me about a job in the entertainment industry. I hear that’s how it works around here, you just wait for people to pursue you. I will have to start searching for a job soon, but football season is just a really busy time for me. Check back in February and I’ll probably have started my job search by then.

Q: What about your writing? Have you finished any major projects yet like TV or movie scripts?

A: Do 2,000-word blog posts count? There’s nothing major finished yet, but before the end of 2012 I’m planning to have at least two television scripts and one movie script finished. The goal is to continue blogging and writing a ton of football content with the hope that a popular blog/website spots my amazing talent and hires me for a seven-figure salary.

Q: Three months in LA…have you made any friends?

A: We do have a couple friends at this point, but there’s a 50% chance they’re just people who feel really bad for us. I do think at times we’re giving off a strong stench of our desperation to make friends (like when we were leaving a BBQ at a friend’s house a few weeks back and I said to the entire crowd, “It was good meeting everyone…we really need friends. When can we all hang out again?” Obviously we haven’t heard from any of them since).

Q: The people in LA have a reputation for being superficial, stuck-up and self-absorbed. Have you noticed any truth to this?

A: There are just as many superficial, stuck-up, self-absorbed assholes in LA as there are in any other major city. I don’t think douchebags are exclusive to Southern California. It’s just that our douchebags are tanner than yours.

Q: You’re living with your girlfriend. How’s that going?

Q: Have there been any issues, fights or surprises during the first three months of your cohabitation?

A: I’ll be reading a statement that Julie has prepared for me: “Living with my girlfriend has been the most incredible and rewarding experience. There have been no fights or issues stemming from us living together. And every surprise has been a good surprise, like when I’m trying to sleep in sometimes and she’s awake and full of energy at 6:30am. It turns out I didn’t really want to sleep until 9:30 after all.”

Q: It seems like you’re unwilling to admit to any cohabitation problems that have happened in the first three months. Are there any problems looming on the horizon?

A: Possibly the issue of us only having one TV. I’ve tried to gently inform Julie that I plan to watch 12 hours of football on Sundays, three hours on Mondays and three more hours on Thursdays (and eventually three hours on some Saturdays). She actually got a dose of how disruptive football season can be when I taped 10 NFL preseason games on our DVR and it caused all of her Sex & The City’s to be deleted. She should be plenty prepared.

Q: One TV? How has that worked out so far?

A: It feels like my viewing of Sex & The City, Say Yes To the Dress, Keeping Up With the Kardashians and Snapped has increased by 5000% since we moved. And yet, if I put the TV on ESPN or the NFL Network for 10 minutes, I get crucified for “always putting it on your stupid sports shows.”

Q: What’s something weird or interesting that will jump out to any visitors of your apartment?

A: Other than the patio being coated in a thick layer of dog piss (there’s a Thompson’s Water Seal joke here, but I don’t feel like writing it)? Probably the fact that nothing we’ve hung on the walls (pictures and shelves mostly) is even close to level. We’re blaming it on the apartment walls and floors not being level, but we wouldn’t even know how to test if that’s true or not.

Q: How about exploring outside of your apartment? Is there good sightseeing in LA? Where have you taken visitors?

A: The sightseeing in LA blows. It’s not an exaggeration to say that the sightseeing in Fitchburg, Massachusetts (which I wrote about in THIS) is better than the sightseeing in LA. I’m about done bringing people to Hollywood Blvd just to see them underwhelmed by all the “stars” on the ground. And sure, there’s the famous Chinese Theater and Dolby Theater, but there’s not much to look at from the outside. The entire Hollywood Blvd area takes about 11 minutes to thoroughly see, and there’s a decent chance you’re gonna want those 11 minutes back when you’re finished. Other than the Hollywood sign, there are no other relevant landmarks worth seeing in LA. Oh, and if you’re like me and had this awesome image of the La Brea Tarpits in your head because of the movie Volcano (starring Tommy Lee Jones where the tar pits are literally erupting and spewing out tar throughout the movie), you’re going to be severely disappointed when you see the real thing: 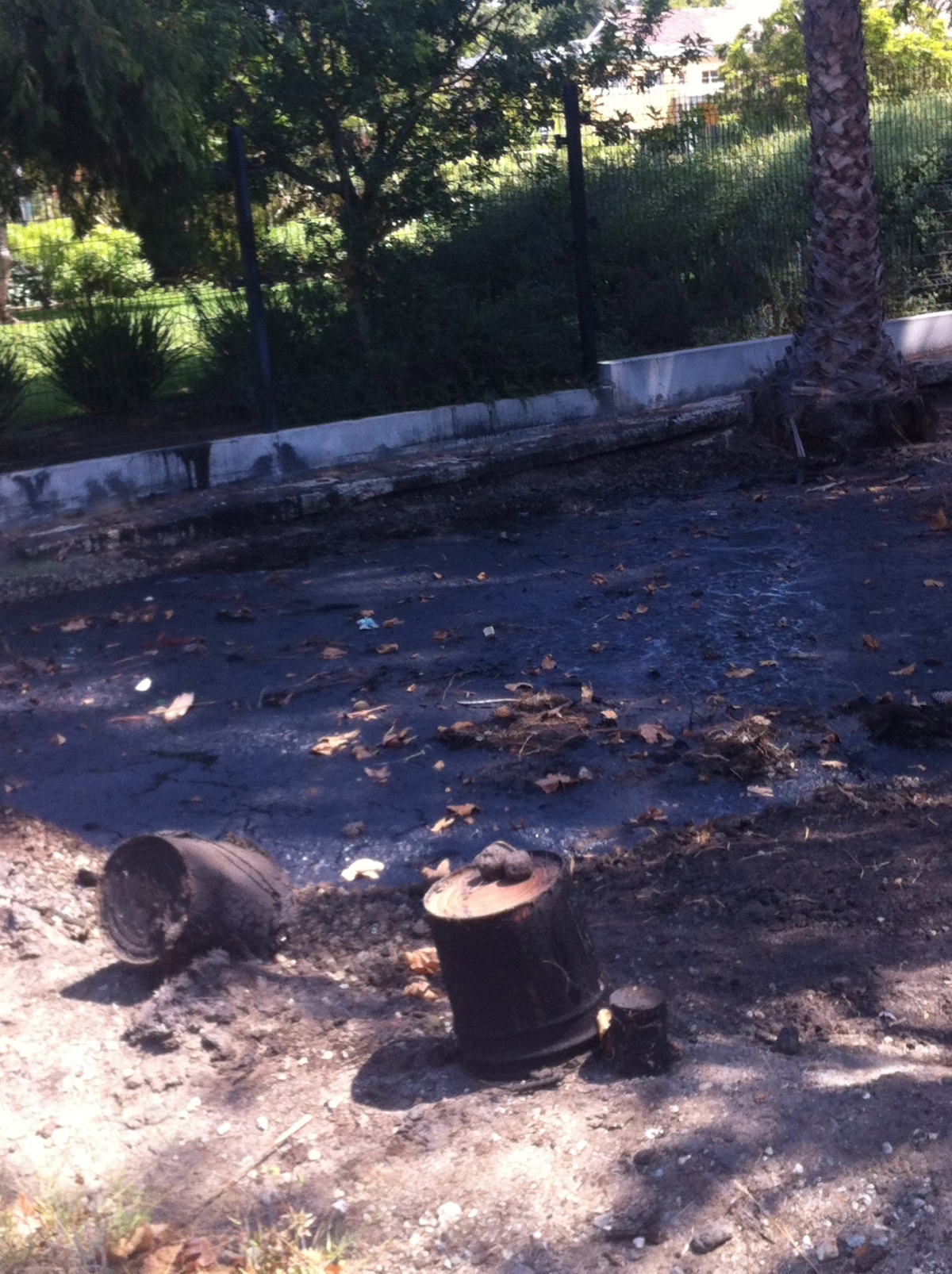 Q: Any final thoughts on living with your girlfriend?

A: Yes, I’d like to address the one topic that every other couple brought up to us when we told them we were moving in together: pooping. Strange as it sounds, every couple we talked to said having to share a bathroom, particularly when one of us had to take a shit, was going to be the biggest adjustment. I’d just like to say that it hasn’t been a tough adjustment at all. I poop whenever I want, wherever I want in the apartment. And Julie has learned to simply go around the corner to the McDonald’s or Starbucks whenever she has to go number two. I don’t understand why this is such an awkward thing for other couples.